Nielsen Gracenote’s Virtual Medal Table forecasts that Great Britain will finish in fifth place on total medals at Tokyo 2020, dropping from third in 2016.

The reduction in medals for Britain is partially due to lower expectations in cycling – track, gymnastics – artistic and rowing amongst other competitions.

In 2016, those three sports accounted for nearly one third of British medals (22). In 2021 however, these sports could produce as few as five podium places. 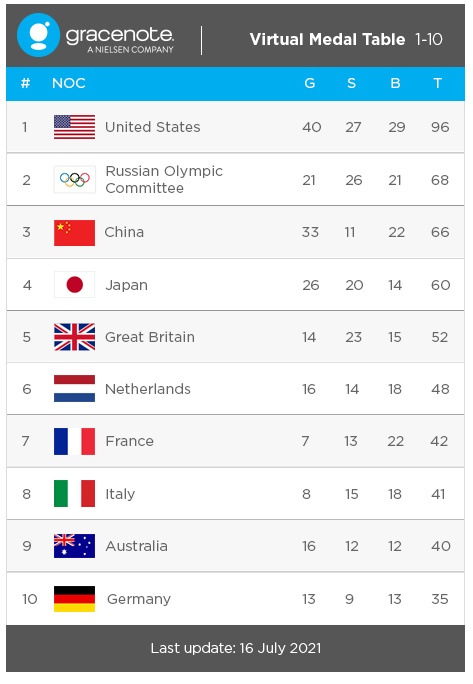 The U.S. is expected to once again top the Summer Games Virtual Medal Table in Tokyo with 96 medals, 25 down on the total claimed by American competitors in 2016.

Nielsen Gracenote’s Virtual Medal Table has used the data available since the last Summer Games to identify the athletes who are likely to be successful at the upcoming Games. But the projection contains more uncertainty than usual because of the pandemic.

Olympic Sailing - How many sailing medals can Team GB win?

How to View the Tokyo Olympic Sailing