Believed to be a first in the UK for the fast expanding Wingfoil class, HISC have put together a Symposium on the day before the race event to explain the concept and how the racing will be structured.

On Saturday 30 April there will be a free Symposium of workshops and presentations from experts on equipment, technique and the competition rules described in Appendix WF to the Racing Rules of Sailing.

The Wingfoil race event on Sunday 1 May, will comprise of a round robin series of short course racing before a final event race.

See the HISC event page for more details and to enter on line . . . 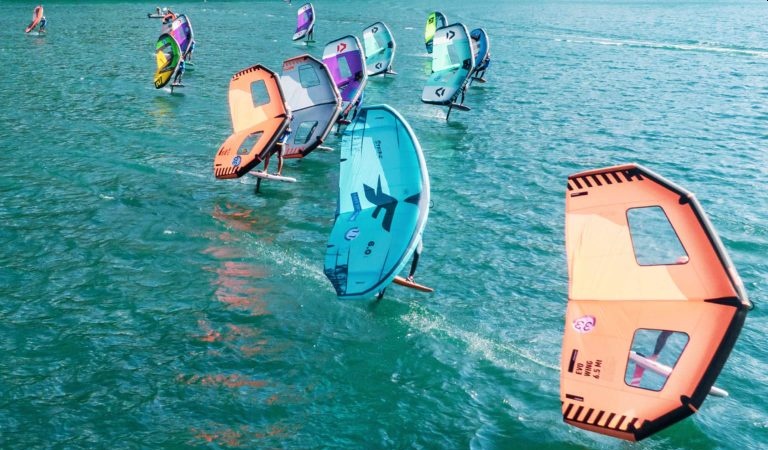 Wing foiling has taken-off in the last couple of years, building on the popularity of Stand Up Paddle (SUP) boards.

While SUP take-up has been huge over the last couple of years, with the Covid lockdown restrictions encouraging people looking for a simple form of outdoor exercise, that is straight forward to pick up and avoids crowds, they are now moving on to more adventurous forms of water sport.

And that next step is a simple form of propulsion, combining the speed advantage of the hydrofoil being used with windsurfing and kitesurfing boards, but without their often complicated set-up.

As handheld wings were developed, removing the requirement for the complicated kite and the mast/sail rigs of windsurfers . . . a new sport was born.

The ability to learn on a board, often a SUP board, firstly with a wing and then upgrade to a full wing and foil combination provides a gentle introduction to the sport.

This has quickly been to taken-up worldwide, firstly for surf-slalom and surf-freestyle competitions, and now with a growing interest in wingfoil racing.

World Sailing, the International Sailing Federation, has been approached to recognise wingfoils as a class, with a box-rule proposed to encompass the many designs available.

The World Sailing Racing Rules Committee, after consultation with the class association, GWA Wingfoil Race Class, has published a development rule – Appendix WF – to be used in conjunction with the 2021-2024 Racing Rules of Sailing for wing foiling course races.

World Sailing is the gate entry controller to the Olympics for the sailing classes, and with the IOC keen to get more affordable and easily available sports into the Games, wing foiling could be on a fast-track.

See the HISC event page for more details and to enter on line . . .

A Wing and a Board Round the Isle of Wight

Princess Sofia Regatta - Day 1 of racing for ILCA, 470 and iQFoils