Hats off to everyone who came along despite the forecast and for getting afloat and giving it a go in some of the most testing conditions we’ve seen in recent years.

Mentioned in dispatches were Jack Napolitano in fourth and fifth Richard Wadsworth of Stokes Bay SC, but everyone who even turned-up for this event deserves a mention. 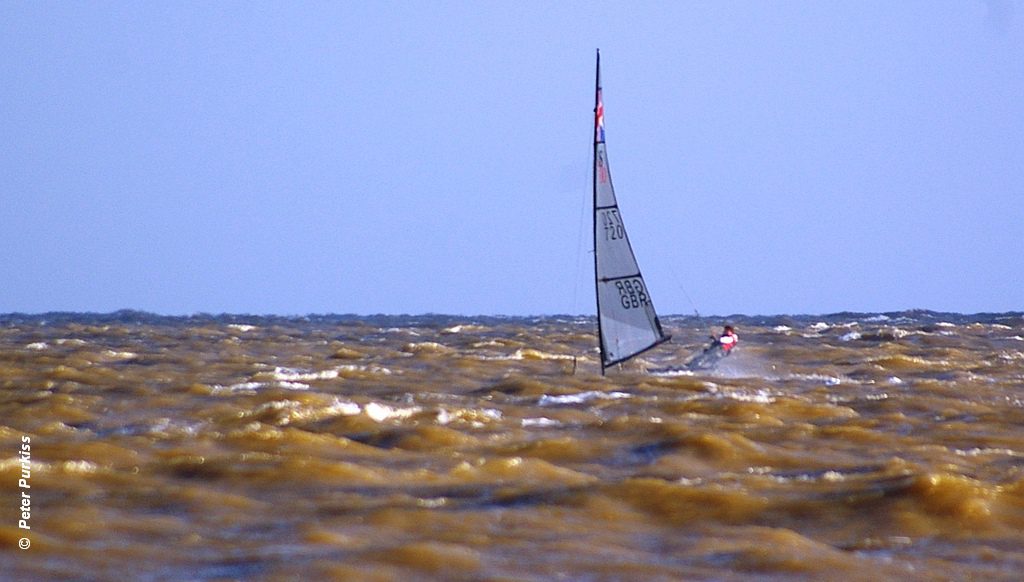 Saturday morning saw competitors arriving to support the event, but as the hail storms rolled through and the gusts peaked at over 40 knots there wasn’t much in the way of haste for getting boats rigged and it was becoming apparent that Day One of the tour event was unlikely to see any sailing.

Sunday, the Race Committee had the course set by 06:30 hrs, yes that’s 06:30am! Guy Playford and his team of volunteers did a sterling job in tricky conditions. The breeze had dropped a bit overnight, but was still blowing 25 knots and the swell from the previous day was still pounding the shore, boats were rigged and launched and racing got underway.

To cut a long story short there was some epic sailing in big breaking waves, some spectacular capsizes including two particularly impressive pitch poles, one of which saw the Royal Navy’s Richard Wadsworth finish the race with two spinnakers, a few bent fittings and a missing lower shroud.

He still came third in that race, sailing across the line bare poles reminiscent of Jack Sparrow stepping off his sinking ship onto the dock.

Colin Dacey managed the conditions well, finishing all three races, but it was Theo Galyer who starred collecting a trio of race wins for his efforts and taking home the tour win.
Robbie Bell

Huge thanks to Snettisham Beach SC and all of the volunteers who kept us fed, watered and braved the cold to keep us safe and run the racing.

Thanks also to Rooster, our tour sponsor. See you all at the next one in Lymington on 8-9 June.