SailGP Plymouth – Goodison finds his Mojo to finish on a high

The Australia SailGP Team, skippered by Tom Slingsby, beat France and the United States in the three-team winner-takes-all Final to move up to first in the Season Championship.

There was also some good news for the Great Britain Team, skippered by Paul Goodison, who with a third in the first race of the day (R4) followed by a win in the final race, finished the event in fourth overall.

This keeps the British team in second place overall, tied on 22 points with the Aussie leaders and ready for the return of regular helm, Ben Ainslie, at the inaugural ROCKWOOL Denmark Sail Grand Prix on 20 – 21 August.

The opening race of the second day, race 4, saw the comeback of Japan following a disappointing opening day in Plymouth.

Despite a fine start by New Zealand, Nathan Outteridge’s team took the lead just before the halfway point and stayed there until crossing the finish line.

Then the home crowd on Plymouth Hoe had something to celebrate, as the British team followed their third place in the opeing race with victory in race 5, finishing ahead of Billy Besson’s France  and the United States of Jimmy Spithill.

It was not enough to earn Goodison’s team a place in the winner-takes-all Final, but it delighted the crowds and earned huge cheers from the Hoe.

In the three boat final Australia took the early lead only to loose rudder contol in their first gybe and trail the USA and France.

On the final run Australia gybed some 50 metres ahead of the French and was able to round the final mark to cross the finish six seconds ahead of France. The USA were third. 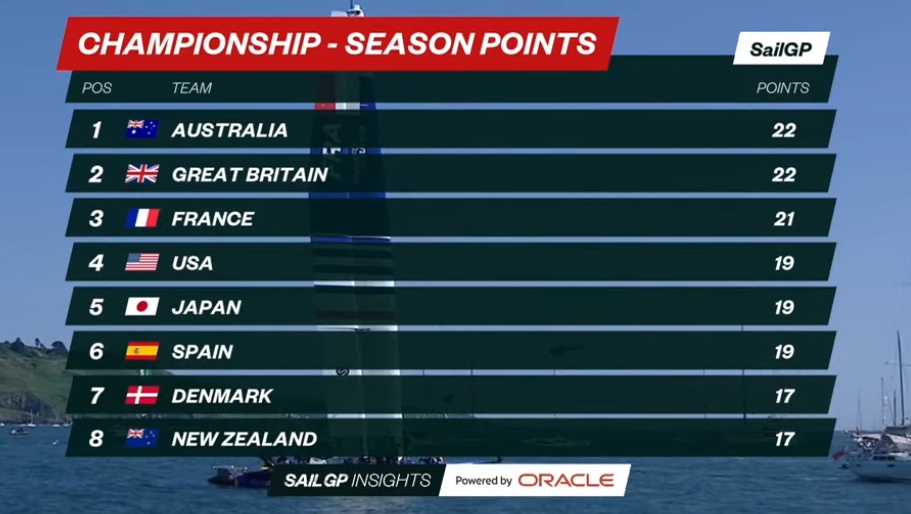