The final day of racing on Sunday will see all the 36th America’s Cup teams on the water for the PRADA Christmas Cup.

After another tough day on the water for the British Ineos Team UK, there is one more day of racing and it looks as if the weather will serve up another light breeze day.

Not good news for Ineos skipper Ben Ainslie as Britannia has shown a distinct inability to match the other three AC75 in light conditions. Not that it has been startling in more breeze, but at least they seemed to be reasonably competitive then.

It seems that the British tradition of poorly designed America’s Cup yachts continues . . . it matters little what the Cup design rule is, the high hopes and fine words of British Cup teams, are rapidly exposed as just that, words . . . when the start gun fires. 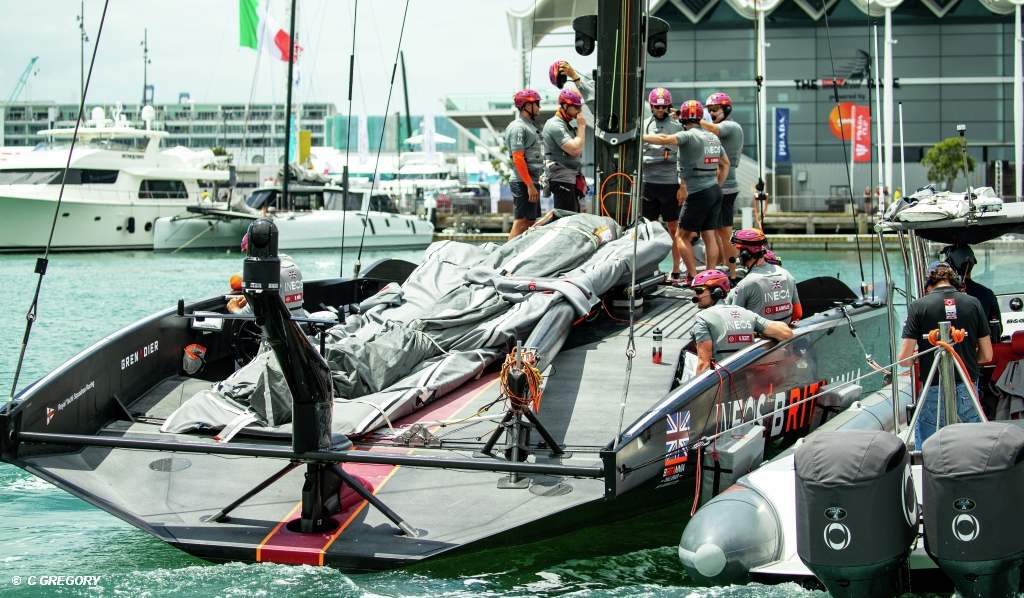 Unfortunately for Ainsle and his crew they have little time for the major changes it seems are required to put them anywhere near the opposition.

We know what Ainslie can do in a ‘level-playingfield’ situation, he has the medals and titles to prove it.

And if the two cancelled ACWS events had taken place there may just have been time to change things, but now it looks as if the die is cast.

Ainslie was part of the miricle comeback by Oracle Team USA in the 2013 America’s Cup on San Francisco Bay, winning eight consecutive races to overturn Emirates Team New Zealand’s lead and successfully defend the trophy . . . it will take an equal effort to turn this situation around.

“It was an incredibly tough day for the team because, as we knew going into today, our light air performance is not good enough and not where we want it to be. That gets highlighted in these boats because if you are in the water and not foiling the losses are huge.”

“Whilst we know that is a weakness it does not make it less frustrating. We are working on trying to resolve it by the start of the Challenger Series next month”

“As competitive sailors taking a beating like that is pretty hard to take so we will go away, regroup, and keep our heads up. The conditions tomorrow are expected to be similar so we will try to learn more about how we can improve.”

The final day of racing on Sunday 20 December will see all the teams on the water for the PRADA Christmas Cup.

Vendee Globe - Leaders back to speed