British competitors took double silver on the first day of Medal Races at the 2019 Hempel World Cup Series Final in Marseille on Saturday.

First Emma Wilson ‘pulled one out of the hat’ in the women’s RS:X race to score her first win of the series, most likely to the relief of the RYA Olympic Selectors who have chosen her to go to the final Tokyo Test event in August.

Then Saskia Sills snatched a last gasp Silver after getting stuck at the back of the fleet, managing to finish ninth to claim the medal. The first time she has ever made it into a medal race at a World Sailing regatta!

Gold went to Lilian De Geus of Holland and the bronze to Flavia Tartaglini of Italy. 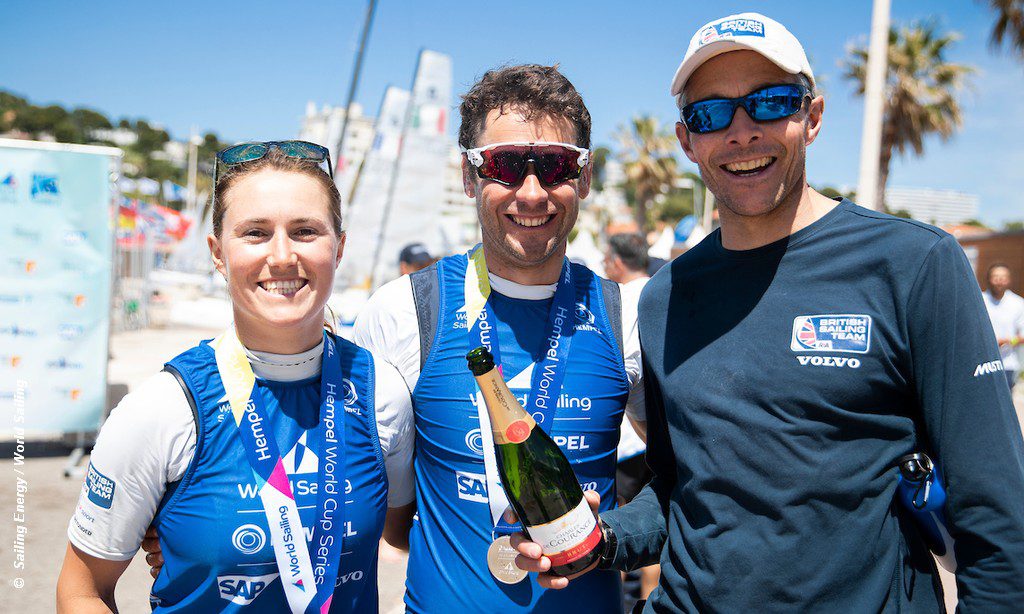 In the Nacra 17 Italy’s Vittorio Bissaro and Maelle Frascari took gold ahead of Britain’s John Gimson and Anna Burnet, with Ruggero Tita and Caterina Marianna Banti of Italy taking the bronze.

In the other medal races decided Saturday, Mattia Camboni of Italy took gold in the men’s RS:X, Federico and Arturo Alonso took the gold, and in the women’s 49erFX Julie Bossard and Aude Compan of France took gold.

Following the completion of Series racing for the 470, Laser and Radial classes on Saturday, they complete their medal races on Sunday.

In the women’s 470 the race for gold in the Women’s 470 will go down to the wire. Just one point separate Britain’sHannah Mills and Eilidh McIntyre and Camille Lecointre and Aloise Retornaz of France. Whoever finishes ahead of the other on Sunday will win gold.

Australia’s Mat Belcher and Will Ryan have all but confirmed gold in the Men’s 470. The Australians are 20-points clear of Jordi Xammar and Nicolás Rodriguez (ESP).

The Finn fleet Andy Maloney (NZL) maintained his consistency and will take an eight point lead over Josh Junior (NZL) into the Medal Race.

In the Laser, Giovanni Coccoluto (ITA) takes a two point lead into the Medal Race but anyone of the top six can claim gold.

In the Laser Radial, Viktorija Andrulyte (LTU) holds a 19-point lead going into the Medal race, only a scoring penalty can see her lose gold. The race is on for the remaining podium positions as six points separate sailors from second to sixth.