Virtual Regatta has continued the roll-out of its on-line eSailing World Championship, making it available to play in 11 different languages.

Over 169,000 eSailors from 74 nations participated in the first season of the eSailing World Championship, and the introduction of new languages expands the games reach even further with the game more accessible than ever.

The success of this on-line sailing event game seems to be down to handing the whole thing over to somebody skilled and successful in their field . . . who know what they are doing!

Virtual Regatta are a company that seems to know what it’s about when it comes producing and running sailing gaming software.

Philippe Guigné, Founder and CEO of Virtual Regatta, commented, “We have a global community of eSailors that is continuously growing. Our simple gameplay coupled with the support of 11 different languages successfully caters to our community and we are already seeing new gamers as a result of our work.”

The 2019 eSailing World Championship was launched in January via the Virtual Regatta Inshore game on iOS and Android devices as well as desktop platforms.

The season will run for eight months and features daily challenges, in-season PlayOffs, a Finals PlayOff and a Live Final in Bermuda at the end of October. 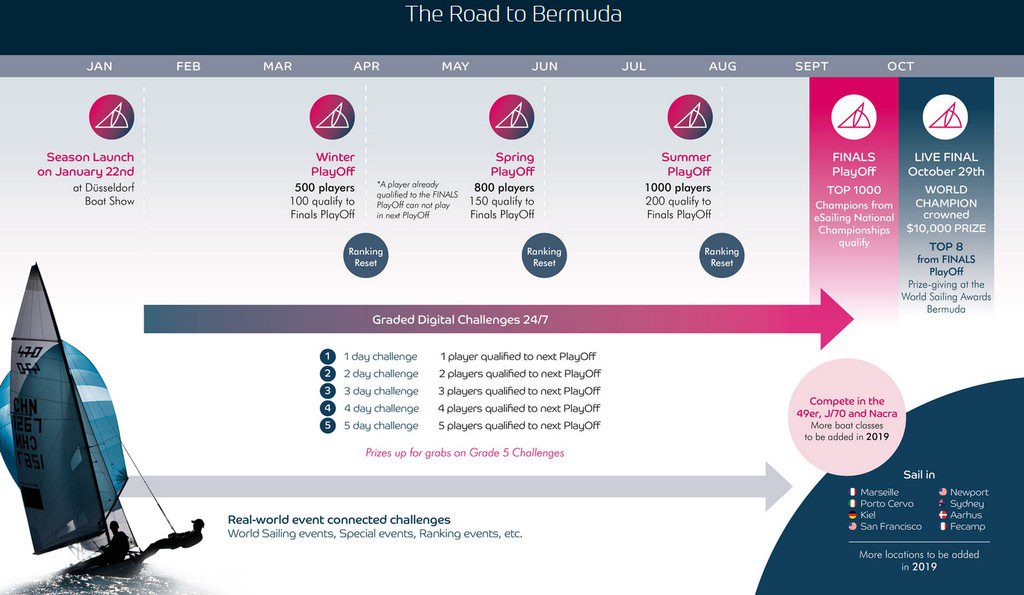 The top eight will qualify for the Live Final where they will aim to be crowned eSailing World Champion and claim the $10,000 USD prize fund donated by Virtual Regatta.

Alongside the regular eSailing World Championship, World Sailing has announced two National eSailing Championships in Great Britain and Switzerland with further nations and formats to be announced.

Virtual Regatta is the leading digital sailing platform with a community of more than one million players. Founded in Paris, France in 2002 by passionate sailor Philippe Guigné, Virtual Regatta strives to give everyone the possibility to discover and practice sailing.