Race Day Three of the Antigua Classic Yacht Regatta, featured the Cannon Course. The 23nm race was simplistic in its two long reaching legs, it was an ideal display of the true grandness of classic yachts in their element.

The 141ft racing schooner Colombia, in all her splendour, took fleet line honours in an elapsed time of 2 hours 29 minutes and 30 seconds.

After the race, the fleet took part in the Parade of Sail. The UNESCO World Heritage site, Nelson’s Dockyard, and Antigua Slipway, was packed with well-wishers, cheering on the spectacular fleet, as they passed the hostelries along the restored Georgian dockyard. 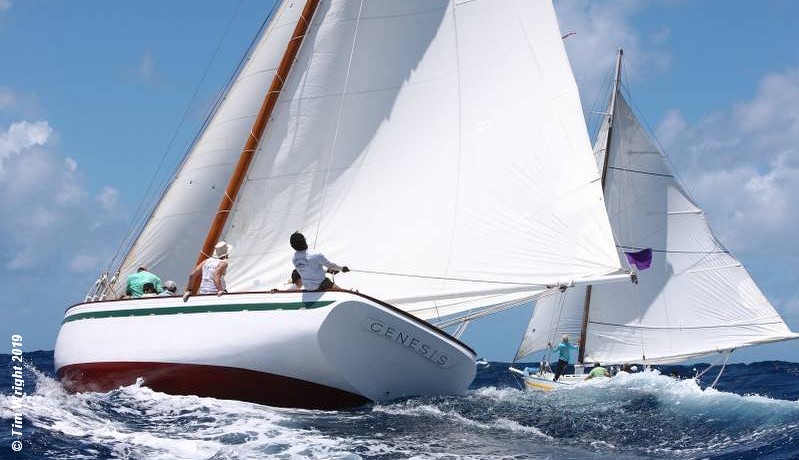 In the Traditional Class Alexis Andrews’ Genesis built by Alwyn Enoe, won the day’s race by just 43 seconds from Sweetheart, which was built by Zepharin McLaren, and is skippered by Charles Morgan.

‘Sloopville’ is situated right outside Skulduggery Cafe in Falmouth Yacht Club Marina, where the apres-racing banter is loud and cheerful, especially so today, as Genesis and Sweetheart go into the last race dead-level on points.

Paul Deeth, proprietor of the Admiral’s Inn, Nelson’s Dockyard, flew an enormous Antiguan flag from the mast of his 1965 50ft John Alden ketch Petrana for the Parade of Sail. 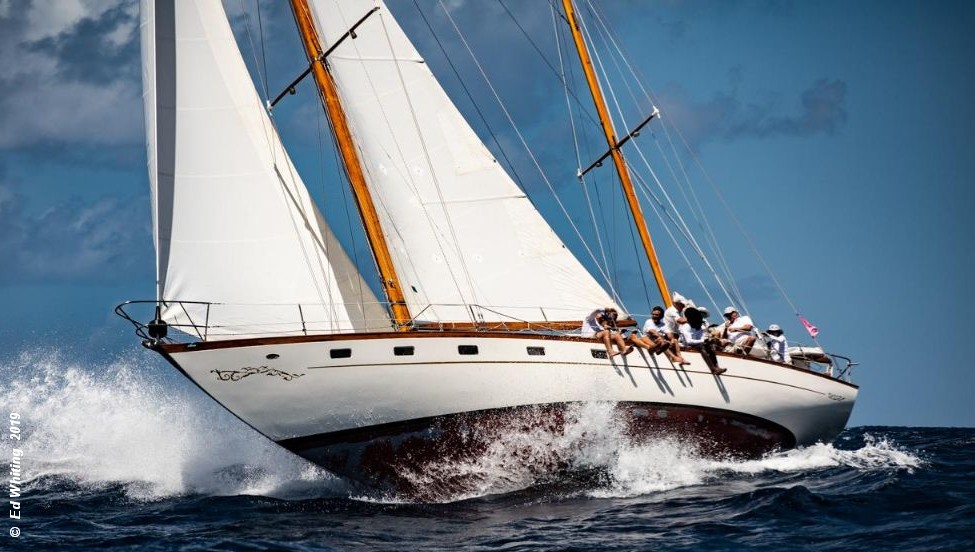 Petrana is one of three yachts undefeated at Antigua Classic Yacht Regatta; Jonty & Vicki Layfield’s 1972 S&S Swan 48 Sleeper, and the Frary family, racing their 58′ ketch Arrluuk, make up the trio.

There were two windward leeward races for the Dragon Class Sunday, both races were won by the Antigua Yacht Club team, skippered by Rocco Falcone, opening up a seven-point advantage on the leaderboard.

In the Spirit of Tradition Class, the Spirit 64.5′ Chloe Giselle, owned by Chloe and Mike Hough, won their second race, to lead the class going into the final encounter. Alexis Lepesteur’s 80′ sloop Volterra, designed by German Frers and John Alden is second in class, just a single point ahead of the 49′ Jim Taylor sloop Blackfish, owned by Carolyn and Commodore Ron Zarrella, from the Great Harbor YC, Nantucket, USA.

Monday 22 April, will be the final race of the 32nd edition of Antigua Classic Regatta on the Windward Course. Eight classes remain undecided going into the last race, which will be followed by the Prize Giving on the lawn of the Antigua Yacht Club.