The success of British competitors in the modern era of Olympic sailing events (from 1948) has been a roller-coaster ride. How did that success come about and can it get back on course?

In the first Games after WWII, in London 1948, Stewart Morris and David Bond won gold in the Swallow keelboat class. That Games is better known for the debut of Denmark’s Paul Elvstrøm where the 20-year-old won gold in the Firefly singlehanded event, the first of his four consecutive golds.

In Helsinki 1952, again a solitary GBR medal, with Charles Currey winning silver in the Finn class. Melbourne 1956 was a better Games for Britain with three medals, silver in the 5.5m and Bronze in the Dragon and 12sqm Sharpie.

No sailing medals in Rome 1960 and then in Tokyo 1964 Keith Musto and Tony Morgan took silver in the Flying Dutchman (FD) class.

Twenty years after the gold for Morris and Bond in the Swallow keelboat, Rodney Pattisson and Iain MacDonald-Smith in the FD class, take Britain’s second sailing gold in the modern era at Mexico 1968, and there was also a bronze in the 5.5m class for Robin Aisher, Adrian Jardine and Paul Richard.

At Munich 1972 Rodney Pattison, this time with Chris Davies, took a second FD gold and Alan Warren and David Hunt a silver in the Tempest keelboat class.

In Montreal 1976 two keelboat classes were replaced with lightweight dinghies, the 470 and the Tornado multihull classes. This was good for Britain with Reg White and John Osborn winning Tornado gold, while Pattison with crew number three, Julian Brooke-Houghton, took a silver in the FD.

International politics meant no British sailing team at Moscow 1980, and when normal service resumed in Los Angelas 1984 it was just one bronze medal, for Jonathan Richards and Peter Allam in the FD.

In Seoul 1988 it was another solitary medal win, but at least it was a gold one for Mike McIntyre and Phil Vaile in the Star class.

Barcelona 1992 saw just one bronze medal, in the Soling 3-man keelboat, and then in Atlanta 1996 it was two silver medals – for John Merricks and Ian Walker in the 470, and for Ben Ainslie in the Laser (after his classic battle with Brazil’s Robert Scheidt).

But outside influences were about to change everything . . .

The Great Britain Olympic team hit rock bottom at Atlanta with their worst overall performance at a Summer Olympics since 1952, with just one gold (rowing) and an overall total of just 15 medals.

Something had to be done, and the Government introduced National Lottery funding for elite sports, which started the following year.

Funding via UK Sport for Olympic sports in 1997 was a game changer for British sport in general, with sailing receiving £5 million over the 4-year Olympic cycle leading up to Sydney (now £25.5 million for the 2016-2020 cycle).

And the sailors received support with the costs of training and competing internationally, signalling the end of the amateur at the top end of sailing competition and the move to full-time sailing teams.

The results were spectacular . . .

It was the start of a purple patch for British Olympic sailing.

Athens 2004 was another 5-medal performance with gold for Ben Ainslie (Finn) and Shirley Robertson with Sarah Webb and Sarah Ayton in the Yngling.

Great things were expected for the London 2012 Games and while the medal count was another six, the gold count dropped to just one. Ben Ainslie’s fourth gold and his fifth medal in total. 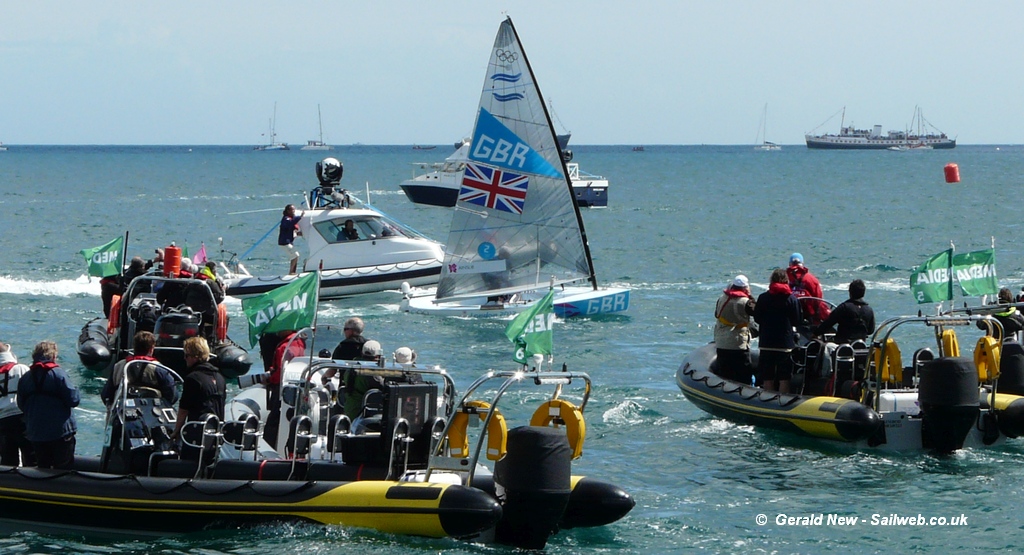 Also for the first time since the start of funding in 1998 Britain did not top the sailing medal table . . . they were third, behind Australia with three gold and Spain with two.

And so, to Rio 2016, which saw the retirement from Olympic competition of Ainslie, Percy and Goodison who had won 9 medals, with 7 gold between them.

The medal count at Rio was three, with gold for Giles Scott (Finn) and for Hannah Mills and Saskia Clark (470), and a silver for Nick Dempsey in the RS:X class.

Britain was able to climb back to top the sailing medal table with their two gold medals, but with the lowest total medal count (3) since funding started back in 1997.

At the 2018 Hempel World Championships for the Olympic classes, Britain finished with just two bronze medals from the 30 medals on offer in ten Olympic events. The Dutch topped the medal table with three gold and a total of six medals.

It seemed that the Lottery boost had run its course. The rest of the world had looked at Britain’s success, and even if not able to match their funding, had found ways to concentrate their available resources where most effective.

The next Olympics are Tokyo 2020, with the sailing based at Enoshima Yacht Harbour, scheduled to take place from 27 July to 6 August 2020.

The RYA appointed Mark Robinson as the new Olympic Performance Manager in June 2017 – To lead the world’s leading Olympic sailing nation as it continues its quest for medal success in Tokyo 2020 and beyond.

On his appointment Robinson commented:

“My role is to support our athletes and coaches, our frontline troops in the quest for gold medals, to achieve their ambitions and those of Great Britain. To that end, it is great to see so many of our World Class Olympians returning and this provides a sound platform for us to push forwards towards dominating the podium in Tokyo.”

Dominating the podium in Tokyo . . . No pressure then!

We will look at the present British Sailing team in Part 2.

Happy New Year - But Be Careful What You Wish For