Over the weekend before – 18 to 22 August – there will be an open Regatta weekend and series of shore-based events celebrating the life and work of Uffa Fox.

Uffa designed the Flying Fifteen in late 1947. There are several stories on how it came about from a Eureka moment in the bath to the workforce stretching out an International 14 mould in the workshop.

However it evolved, in 1948 he built his prototype “My Dainty Duck” and took her around the country to promote the design and by 1949 there were enough boats to hold the first national championship at Cowes where 13 boats competed. The regatta was won by Sqdr Ldr Nance in number 6 “Neesa”.

1949 was a significant year for the class as Uffa persuaded the people of Cowes to fund the building of probably the most famous Flying Fifteen “Coweslip” as a wedding gift for the Queen and Prince Philip. 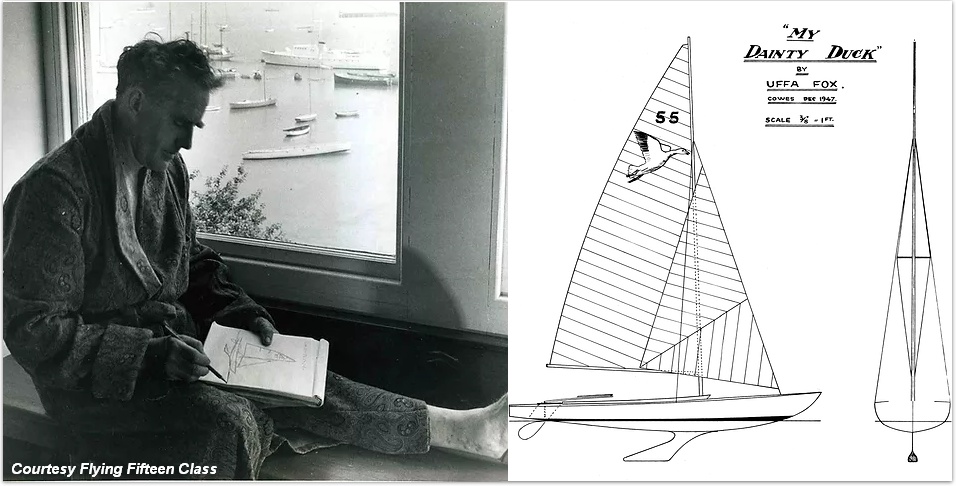 Uffa sailed with Prince Philip in Cowes Week in the Flying Fifteen class until the late 1960s.

Uffa Fox designed boats will be hosted and organised by the Royal London Yacht Club. The event is very much about having fun and celebrating Uffa Fox and his designs

The sailing will be at the heart of the event which will also include static displays for historic boats. The Classic Boat Museum will host receptions and talks in their buildings which include a large Uffa Fox Collection.

The organisers have already consulted with Class Associations for the Uffa Fox designs and circulated on Uffa Fox related Social Media groups.

The response has been very enthusiastic and we are anticipating an excellent weekend. So far over 60 boats have expressed their intent to attend from across the classes below and we expect interest to grow as the event is publicised more widely.

The organisers are still actively pursuing representation from his other class designs including: International Canoe, Gannet 14, Flying 10, and Swordfish and Uffa’s one-off yachts.

There is only one criterium for entry/participation: boats must have been designed solely by Uffa Fox.