The Flying Fifteen class has come a long way since Uffa Fox designed and built the first hulls at his Cowes based boatyard back in 1947.

But while the latest hulls are state-of-the-art racing machines, the class has a strong “Classic and Silver” section restoring and maintaining older boats in racing condition.

Right from the earlist days a number of well known UK builders constructed 15s in their preferred method . . . including Uffa himself, Medina Yacht Yard, Jack Holt building number 16, and Tormentor who built No. 192 Coweslip, presented to HRH Duke of Edinburgh and Princess Elizabeth as a wedding present.

Chippendale Boats of Fareham built many Flying Fifteens in the early years of the class, a number of which are fortunately still around and highly pampered by their proud owners.

One such Chippendale owner is UKFFA President Bobby Salmond who owns Vamoose – F15 627 – and he has been in contact with Eric Harvey who worked as Foreman at Chippendale Boats in it’s heyday, and Eric has put together this excellent memoir of those early days . . . and a very different world. 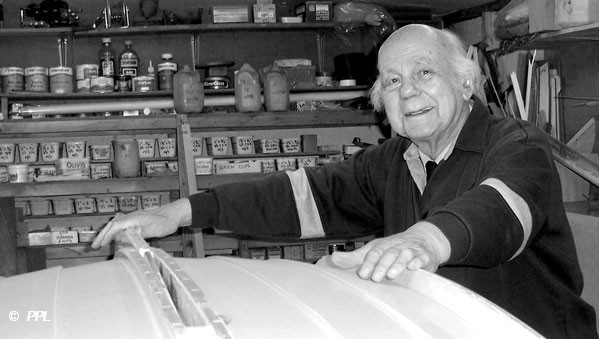 Jack Chippendale started his business in 1947, and took his first order for a Flying 15 soon after, but the bulk of his sales were carried out in the 1950s and 1960s.

Cold moulding was a fairly new method of construction at that time. Having heard of Uffa Fox he decided to ring him with a view to a visit. Uffa agreed to this so a trip to the Isle of Wight was arranged.

On arrival Jack was shown around his boatyard, where Uffa was able to give a lot of help and advice. This information was useful for enabling him to proceed with these craft.

According to Jack’s unfinished autobiography, he notes that double-skinned diagonal veneers were used, timbered internally with copper nails driven through and turned. The idea was that once the nail was in place, the tip was first turned before being bent tight down on to the timber – a neater method than purely bending-over the nail.

According to one of the ex-employees who worked on these, they were made-up of two layers of 1/8” plywood followed by a final skin of 1/8” veneer. It could possibly be that the method of construction changed in the intervening period.

I certainly recall veneers being glued and staples being fired through off-cuts to prevent marking the surface of the hull. A staple extractor was then used resulting in grazes to the knuckles as on occasion the tool slipped.

Frank Alexander, one of the employees, recalls accidentally stapling his mentor’s hand to the boat, and was casually told to get a pair of pliers – there was no swearing or complaining about the situation as, luckily, his colleague was a very calm person. 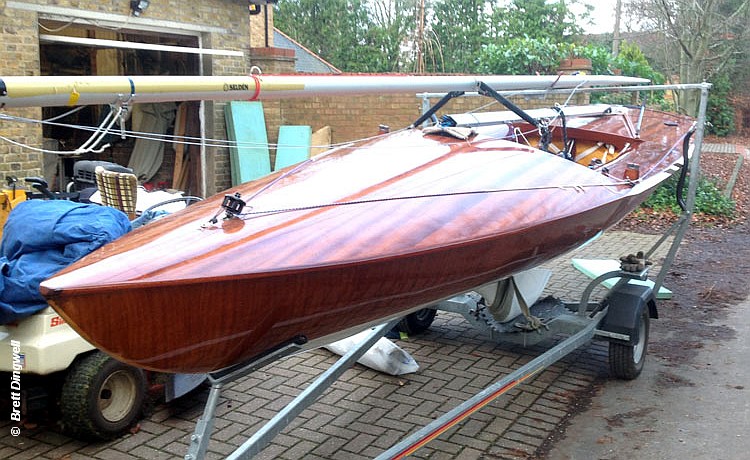 One difficulty was the fitting of the “Crewsaver” buoyancy bags, tucked-up under the side decks, and the comment that they “smelt horrible”. I seem to recall veneers being purchased from the Isle of Wight, Souters boatyard I believe.

First of all these craft were produced at Lower Quay, Fareham in Hampshire, but after a while production moved to an additional workshop off High Street in Fareham.

At the height of production these boats came “off the line” once every six weeks, and on completion at that stage would be hoisted onto a trailer, and with two men, wheeled by hand down High Street, along part of West Street, left into Quay Street, and finally to the boatyard at Lower Quay (a distance of almost a mile through pedestrians and traffic).

On two occasions in the winter of 1963 (the deep freeze) this operation was carried-out in deep snow. Health and Safety rules weren’t so stringent in those days! The final completion stages were then carried-out at the main factory.

Regarding the rudder, this was a two-part mahogany blade. Housed into this was a ¾” stainless steel rod, cranked at the top to continue vertically through the top of the deck, and three cross-pins at the lower end to eliminate the possibility of the blade rotating on the shaft.

The two halves of the blade were glued with Cascophen Resorcinol resulting in a rigid assembly. It was a good, strong waterproof adhesive (not sure if this is still available). I suspect nowadays rudders are of a GRP or even carbon-fibre construction.

I remember an occasion, helping to paste grey International filler to the outside of one hull, and leaving it overnight to set, then finding it had gone-off like concrete. This took hours and hours to sand down to a surface suitable for the next stage in the painting process. Needless to say this type of filler was not used again.

Towards the latter part of F15 production, two GRP hulls were purchased for fitting-out. These were a lot heavier than the wood version. When completed they were shipped to Port Moresly in Papua New Guinea.

One boat was sold to Mike Golding, then Catering Director of Warners Hotel, on Hayling Island. I expect if records were checked at Hayling Island sailing club it would be discovered that he and his wife June (apologies if I am wrong with either of the names) were members there at least in the 1960s.

Another owner was Bill Kempner, who also sailed at Hayling Island and was a prominent member of the club. He was a Director at Chippendale for a while. I remember helping to lay a floor in the holiday home he owned at Sandy Point, so that he was close-by for his sailing activities. One snippet to throw-in is that he ran a sausage skin business at the time.

There is a vast amount of Jack’s paperwork, at the moment lying mothballed, at the Maritime Museum in Falmouth. It consists of plans, correspondence, photos etc. The intention is that one day this collection will be put on display – we can only hope.

Whether the museum would allow access for anyone to check-through in the meantime I would not know, but I am certain there must be a lot of information and possibly photos relating to F15s.

Many Flying Fifteen open events have prizes for silver and classic boats racing in the main fleet and occasionally there are separate starts.

The 2019 World Championship will be held at the National Yacht Club, Dun Laoghaire and sailed on Dublin Bay, between 2 -13 Sept 2019.