The SailGP class fitted the bigger 29m wing to cope with the light-wind conditions at France Sail Grand Prix in Saint-Tropez for the final day.

in the two final fleet races . . . The first race, Race 4 saw most of the fleet over the line, sailing the first leg with penalties, this resulted in Denmark of Nicolai Sehested leading at the first mark.

Japan of Nathan Outteridge eventually took the lead on the last leg and held it to the finish, with Pete Burling squeezing New Zealand across ahead of the Ben Ainslie’s British team.

Final fleet race, Race 5, saw an all-clear start, but Ainslie took a penalty trying to get through a non-existant gap.

Denmark again led at the first mark with the Brits in sixth, in a race they needed to win.

At the finish Nicolai Sehested and Denmark took a second win, ahead of Spain of Phil Robertson with France of Billy Besson in third. The Brits finished fifth behind USA of Jimmy Spithill.

In the three boat race, Spithill nailed the start to lead at the first mark. Robertson and Outerridge both had penalties and were some 100 metres behind.

The teams were struggling with foiling, despite the big wing and Spithill kept the lead at gate 3 ahead of Outerridge, as they split to either side of the course.

When they came back together Outerridge grabbed the lead at gate 4 in non-foiling mode, desperately looking for the wind up the final shortened leg.

Meanwhile the Robertson roared in to round on their foils and overtake the Americans who were struggling to foil.

At the finish it was Japan of Nathan Outteridge who took the grand final race, finishing on their foils at 34+knots.

Japan move into the overall series lead in an three-way tie with USA and Australia. The Great Gritain team of Ben Ainslie drop to fourth, one point off the leading group. 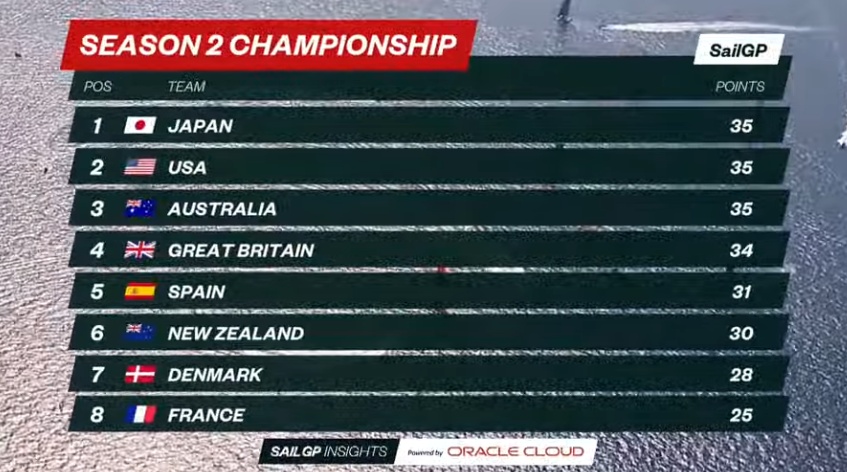 Spithill sweeps into lead on Day 1 of SailGP Saint-Tropez