Spithill sweeps into lead on Day 1 of SailGP Saint-Tropez

Good news and bad news for British SailGP fans on day 1 of the SailGP events in Saint-Tropez, France.

But, after that flying start it was all downhill for the Brits.

Race 2 was all about Jimmy Spithill on the USA boat, sailing away to a clear win ahead of Japan and New Zealand of Pete Burling, with Ainslie finishing fifth.

And then in the final race of the day, it was the USA coming back to take the lead from the Danes of Nicolai Sehested at the start of leg 5 and then holding it to take a second win.

New Zealand took a tight third place ahead of Spain, while the Brits finished eighth and last.

This put the USA of Jimmy Spithill, Paul Campbell-James and Andrew Campbell, in first place overall on 20 points, three points ahead of New Zealand with Spain in third, tied on 16 points with Japan.

Speaking after the opening day of racing, Ben Ainslie said:

“That was a mixed bag of a day. Great first race, average second race and bad third. We had a good start in the first race but after that our starts weren’t good enough and that will be the most important area we will analyse.”

“Every day you sail these boats you learn something new and that’s the secret to keep pushing forwards. The difference between the teams is so marginal that any team can win races. That’s what you want to see, good competition and we’ve certainly got that.”

“Tomorrow, we’ve got two races to get ourselves into the final podium race. We will work out what didn’t quite go right today, learn from that and come out firing.”

Sunday there are two more fleet races and Ainslie, in fifth place with 13 points, will need to find his winning touch again if the Brits are to make the three boat final. 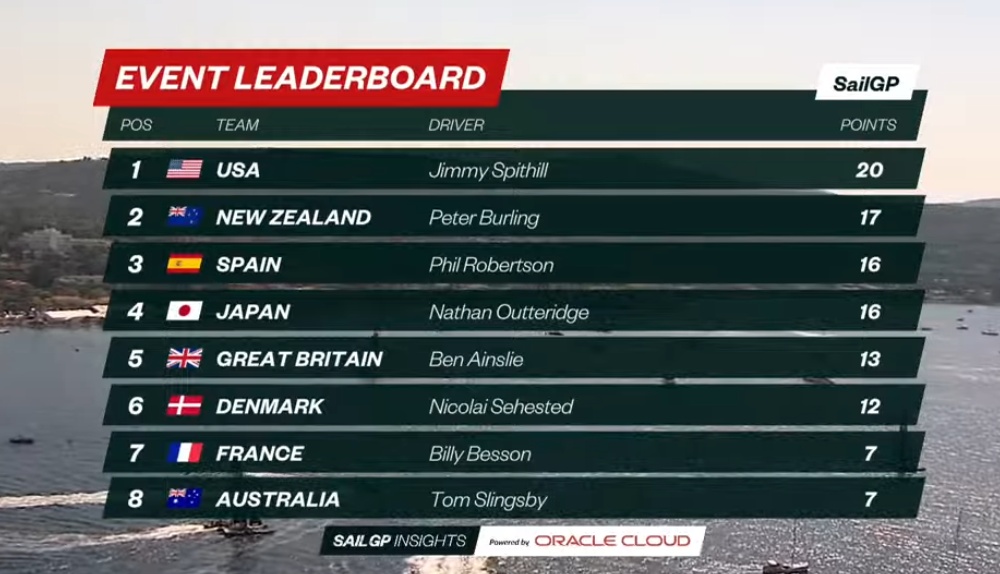