Of course, we have been here before . . . only last September Emirates Team New Zealand launched the first ever AC75, in Auckland to the anthemic strains of Rod Stewart’s Sailing.

As we approach the anniversary of that first launch window speculation grows as to who got their first version right?

By now we should have seen at least two ACWS regattas (Cagliari and Portsmouth) involving all the teams, which would have removed some of the doubt and showed us just who needed to go back to the drawing board.

But the Covid-19 pandemic restrictions removed those regattas and we are still in the dark as to which design team has hit the jackpot first go!

In fact, the teams were presented with a completely changed game-plan.

By the time we get to see the boats racing together in Auckland this December, at the one and only remaining ACWS event, the teams will have rolled out their second AC75 versions.

This gives them the option of using their first or second AC75 in the remaining ACWS  event in Auckland in December 2020.

It is assumed that they will want to use the December ACWS races as their final tune-up of the new AC75 they intend to use for the Prada Cup Challenger Selection Series in January and February 2021.

If that is the position and they then find that their second version is outpaced in the ACWS event, they will have very little time to remedy things.

Next month will see the new hulls being moved to Auckland for final fit-out and launch and some hasty tuning.

The loss of the two earlier ACWS events removed a possible design-update window and has forced the design teams to remain locked into their plan B without any heads-up from competitive racing.

Which of the four teams will be confident enough of their original design to reveal a simple upgrade iteration?

And which will dump their first hull design and roll out a dramatic change of direction?

In the Scow corner you have INEOS Team UK and American Magic, while in the Skiff corner we have ETNZ and Luna Rossa.

Since the initial launch INEOS appear to be the only team to have made use of the opportunity to reconfigure their hull.

While in Cagliari the British team used the 12.5% hull surface area modification permitted by the AC75 class rule, to add a simple centre hull skeg, mimicking the skeg/bustle that is a feature of the New Zealand and Italian skiff style hulls.

Does this indicate that INEOS will reveal a Skiff hull form for their second hull . . . or did they just want to compare their earlier data to see if there was any performance/handling gain versus their original scow shape?

INEOS Chief Designer Nick Holroyd, when asked if the second boat would be more radical replied:

It will be different . . . even if you think you are right you would not build another one the same. I am not arrogant enough to think I am right. And there is a lot to learn from other people, to put resource into different places in the design cycle.

Over the next couple of weeks, the new INEOS AC75 – Britannia-2 – will be fitted out at the Portsmouth HQ  and prepared to be air freighted to Auckland in September.

Meanwhile Britannia-1 will be packed and head to Auckland as (slow) ships cargo.

Some team members are already in Auckland to prepare the INEOS AC36 base HQ for the arrival of the two hulls, with Britannia-2 expected to be revealed  in Auckland to start sailing this October.

All team members and families will of course be subject to the 14 day quarantine for new arrivals in New Zealand.

NOTE – Auckland has just gone back into Lockdown Level 3 from midday 12 August 2020.

A lot is riding on the second Britannia version for INEOS Team UK . . .

The trouble is that the Brits have been trying to do just that since 1851 and especially in the modern era have not even come close.

And as Ainslie well knows, historically the Achilles’ heel has been the design stage, something the fifty strong INEOS design team are hoping to put right this time around. 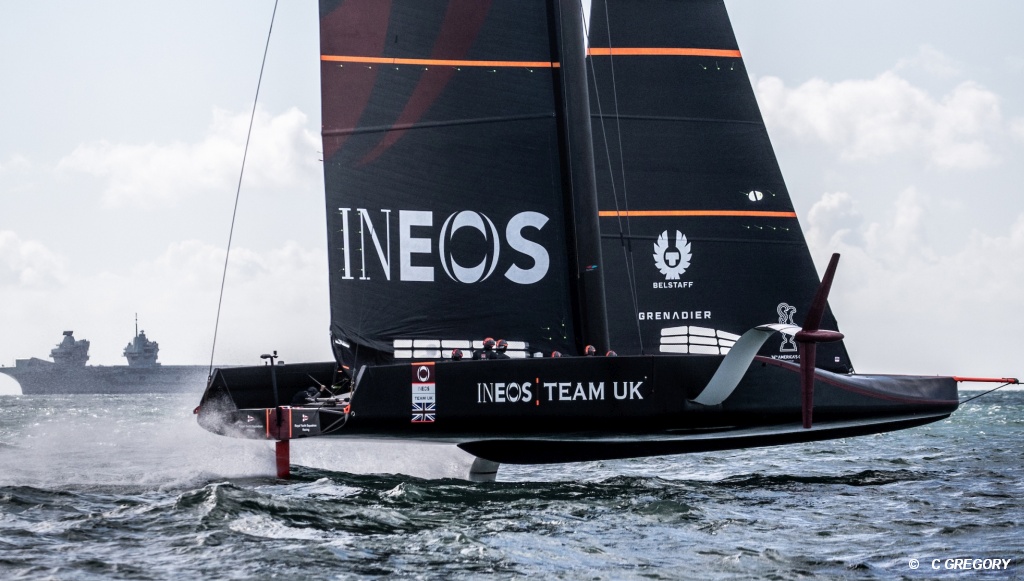 The winning challenger of the Prada Cup Challenger Selection Series, will face the Defender, ETNZ in the 36th America’s Cup match.

Ainslie takes the modified Britannia for a spin