The 14th edition of the classic offshore race, the Transat Jacques Vabre, has started from Le Havre with a record 29 yachts in the IMOCA class each looking to finish on top in the famous ‘coffee route’ sprint.

British sailor Alex Thomson and his co-skipper – fellow Briton Neal McDonald – departed from Le Havre, France, on Sunday in their debut race onboard the new HUGO BOSS to begin the double-handed 4,350mile race, which finishes in Salvador, Brazil.

Thomson remains ‘one to watch’ in the highly competitive IMOCA class.

In 2016 he broke the British record in the solo, non-stop, unassisted Vendée Globe, topping the third-place finish he secured in the 2012-13 edition of the race, which remains the pinnacle event in the IMOCA calendar.

And the British sailor finds himself in good company as he tackles the double-handed Transat Jacques Vabre. His Co-skipper, Neal McDonald, is a seven-time Volvo Ocean Race competitor, and former Olympic sailor, with more than 30 years’ experience in professional sailing.

Now Performance Manager at Alex Thomson Racing, McDonald has worked closely alongside Thomson and his team since 2016.

The Transat Jacques Vabre, the pair believes, will be a prime opportunity to work together to learn more about their ground-breaking new boat.

The new HUGO BOSS is one of five new generation IMOCAs in action in the Transat Jacques Vabre.

McDonald: Our goal is the Vendée, this is a stepping stone for us, and it’s a lot to ask one person to sail for two or three weeks and take all the information in. It’s a learning process and me being here is hopefully going to help that process. It’s also a great opportunity for me. 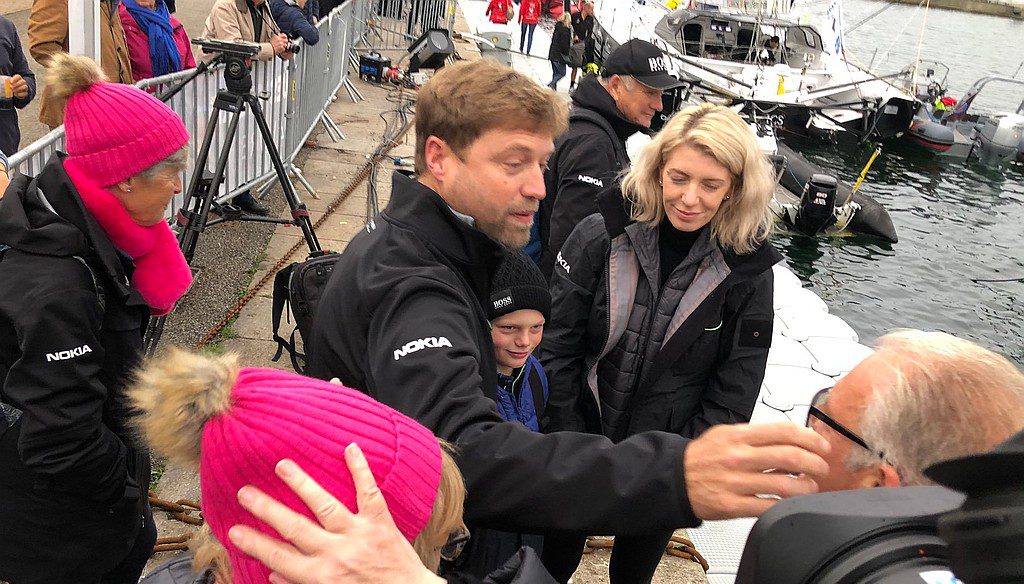 Will it be hard not pushing for victory?

Thomson: It’s not hard, no, not after last time. (a capsize and helicopter rescue). My hope is we finish . . . And if we get a chance to have a bit of fun with some of the other boats then I hope we’re on pace.

McDonald: My money would be on Charal. We watch these boats and I’m very impressed by the way they’ve tamed the beast, because they are beasts.

What’s the biggest differences to other new boats?

McDonald: The cockpit is the most obvious, but our foil choices are very different to everybody else. We made some big gambles, which were the cockpit, the energy – the electric engine and solar panels – and the foils.

What so different about the foils?

McDonald: The orientation and when they’re pulled up they’re very high. It’s a bit of a gamble because when you have them up very high they’re less stable. But on the other hand you have the possibility to bring (them) in, which could be quite important on some parts (of the race).

We’re locked into that decision that was made on the foils eight or nine months ago. You’d have to be very wrong to modify it because the deck is built around it. The die is cast. Cards on the table.

And can you see everything you need to from the (enclosed) cockpit?

Thomson: I have better vision in here. I can see the jib anytime I want to without wearing goggles, without using a torch.

We did 1,600 miles and we’ve got two cameras on the stanchions looking forward and it’s the first time in my life and we can always see forward.

The new HUGO BOSS is one of five new generation IMOCAs in action in the Transat Jacques Vabre.

As the skippers begin their 4,350 mile journey, each will be hoping that the decisions they made during the laborious design and build stages will pay off, and that they successfully – and safely – make it to the finish line in Salvador de Bahia.

Clipper Race - The race to Cape Town is on