Day 3 of the Trofeo Princesa Sofia Iberostar regatta on Mallorca and as we reach mid-point of the qualifcation races the pressure to reach the Top 10 grows.

No more so then for New Zealand’s Peter Burling and Blair Tuke who stuttered at the start but are getting back into that winning groove. After two warm-up races they hit the front in race 3 and steadied with a 5, 7, 3, scoreline today.

They sit in 13th overall after six races, with NZL Olympic place rivals Dunning Beck Logan and Oscar Gunn in ninth place. A work in progress.

In the 49er, Brits lead both the men and women’s events. Fletcher and Bithell take a one point lead ahead of Yago and Klaus Lange ARG.

While in the women’s FX, Dobson and Tidey won two races to lead by four points from Brazil’s Martine Grael and Kahena Kunze who picked up the other win.

The Kiwi battle continues in the Finn between Andrew Maloney and Josh Junior, while Gile Scott had his worst day (12,14) to sit in seventh place.

In the Nacra17 Gimson and Burnet jumped-up into second place behind new leaders Gemma Jones and Jason Saunders of New Zealand, while Saxton and Boniface slipped another place to seventh overall.

In the Laser gold fleet, Britain’s Lorenzo Chiavarini picked-up his second win, and is just three points off leader Hermann Tomasgaard of Norway.

Not to be outdone, Elliot Hanson (4,2) rocketed up the table to sit in seventh overall. Nick Thompson had a tough day, but still picked-up to place 10th overall.

Better news from the men’s 470 where Patience and Grube (4,4) move into third place, five points off leaders Anton Dahlberg and Fredrik Bergstrom of Sweden. Wrigley and Taylor (18,3) also closed on the magic top 10, now in 13th place. 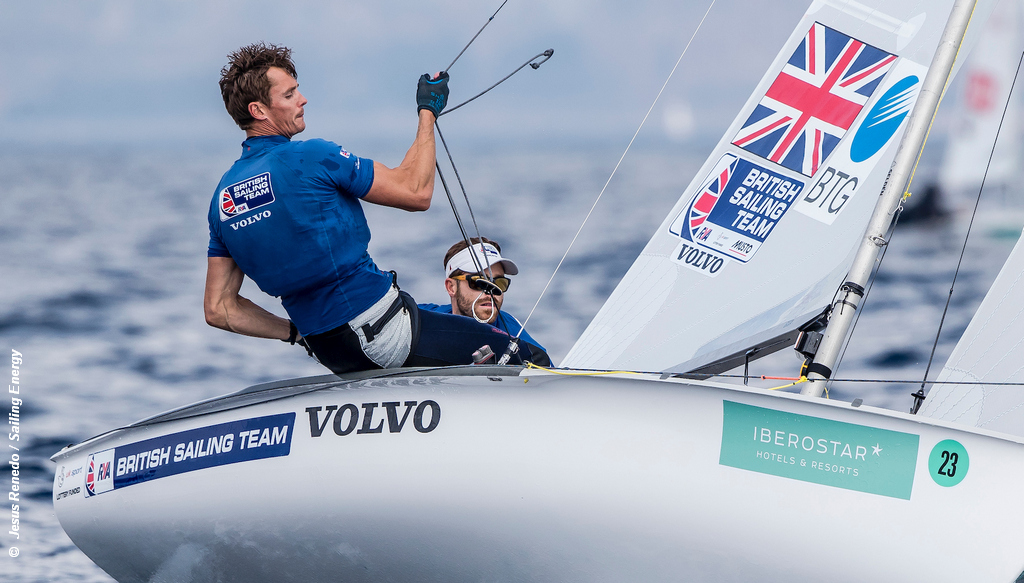 The women’s 49erFX moved into gold and silver fleets to decide the medal race . . .

The Nacra 17 managed another three races for their gold and silver fleets, resulting in a change of leadership.

Racing in gold and silver fleets Paige Railey of the USA took her first race win in race 5, she is eighth overall. Svenja Weger of Germany won the second race.

Second day of racing for the 49er and they continue in three flights, and Dylan Fletcher celebrated his birthday by topping the leaderboard.

Other GBR: 27th James Peters and Fynn Sterritt (3,11,21), 38th Jack Hawkins and Christopher Thomas. Both miss the cut for the gold fleet.

The men’s 470, racing in gold and silver fleets, sees a change in the top of the leaderboard.

In the women’s 470, racing as one fleet, Luise and Helena Wanser of Germany win both races and move into fourth overall.

Three races completed today with Maya Morris returning after missing two races to score a 2 and 1 but then miss the final race, she is 22nd overall.

Britain’s Bryony Shaw did not race.

Three more races for the men with Mateo Sanz Lanz (3,2) SUI confirming his lead before not racing in the third race.

Britain’s Andy Brown who won a race Tuesday, did one race and then withdrew Wednesday.

The RS:X sailors are taking part in their European Championships straight after this regatta at the same venue, so there is a lot of dipping in and out.

Trofeo Princesa Sofia Iberostar – How has it gone to date?