The Royal New Zealand Yacht Squadron has clarified its position on the Special General Meeting (SGM) requested by a member, Mr Jim Farmer, regards the defence of the America’s Cup in New Zealand.

The Club’s Flag Officers have accepted this request and are looking to confirm an SGM date (9 Dec confirmed) as soon as practicably possible, with a view to achieve an outcome that satisfies all parties.

The original motion proposed by the petitioners is ” . . . that the America’s Cup be defended in the waters adjacent to the City of Auckland”.

The RNZYS statement makes clear that the consequences of not organising a venue to defend the Cup are potentially dire . . .

No cup defence at all, and giving the America’s Cup back, having been unable to stage a defence and meet obligations under the Deed of Gift.

In the statement issued by Commodore Aaron Young, posted on the RNZYC website 22 November they state . . .

While we understand the intent of the motion, it is currently not in a form that is able to be implemented under the operating rules of the Club. We are therefore in discussions with Mr Farmer to progress consideration by SGM of their actual intent in a form that can be accepted and voted on. Those discussions are currently underway.

As part of the contractual agreement between RNZYS and ETNZ, ETNZ has responsibility for conducting the 37th America’s Cup defence, with all aspects of the AC37 organisation, management, and fundraising, resting with them.

In return the Club is not required to make any financial contribution to America’s Cup activities, and RNZYS – its officers and members – are fully indemnified from any liability, financial or otherwise.

These have been the fundamental principles of our contractual arrangements since the 1995 challenge. It is through these arrangements that we are now in the privileged position of being the Trustee of the Cup for a fourth America’s Cup cycle.

The statement  continues . . . RNZYS’s preference for AC37 to be held in New Zealand, however it needs to be viable to allow this to happen.

What we and the team have allowed ourselves is time to do everything possible for this to happen. It is also very important to us that ETNZ remains viable, that we keep the Team together, and we honour our commitments and undertakings with our Challenger of Record, RYS and INEOS Britannia.

Currently, we do not have a viable New Zealand venue proposition, and as a result ETNZ are in discussions with other potential locations. It would be an unprecedented achievement to win the America’s Cup three times in a row, and taking the defence overseas – while not our preferred choice – may well offer the best chance for us to do so.

There needs to be a reality check on the current situation in respect to a New Zealand based AC37 Match.

ETNZ needs to secure the necessary funding with local and Government support to hold this event in Auckland. Unless this happens we need to consider offshore venues.

So while we absolutely understand and support the sentiment of the petition and their desire to “have the event in New Zealand”, the answer is not that simple. 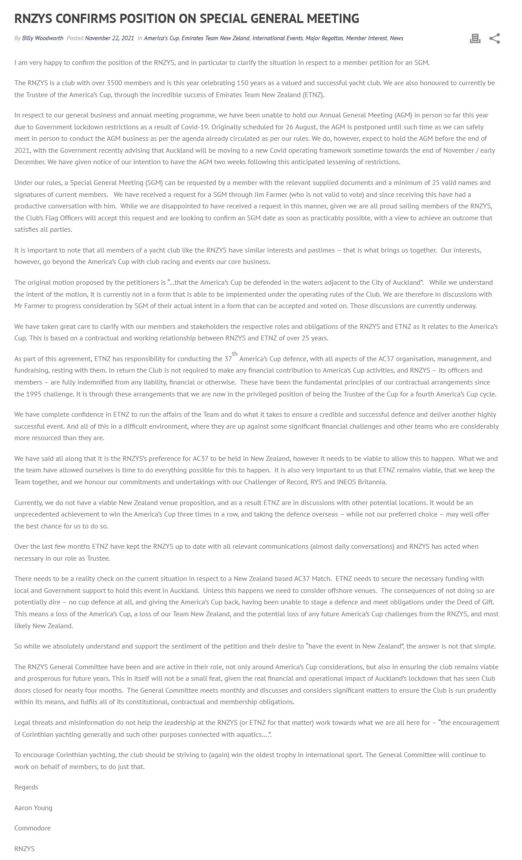