Two more Prada Cup Final wins on Sunday confirmed their 7 – 1 victory over Ineos Team UK who could find no answer to the Italian teams’s superior boat speed and handling.

Coming into what was to be their final day in the Prada Cup Final, the challenger selection series for the America’s Cup, Ben Ainlsie and the Ineos team needed to win six out of the next seven races.

In the first race of the day (Race 7) Ineos edged the start to lead to the LH boundary with Luna Rossa behind and to windward, but after the tack Luna Rossa squeezed up to force Ineos to tack away and luna jumped to a 70 metre lead before tacking back to comfortably cross Ineos.

Luna Rossa rounded gate 1 with a 16 sec lead and it was essentially race done for the Italian team who went on to cross the finish with a 1m 45 sec lead to take race win 6, one race away from ultimate overall victory. 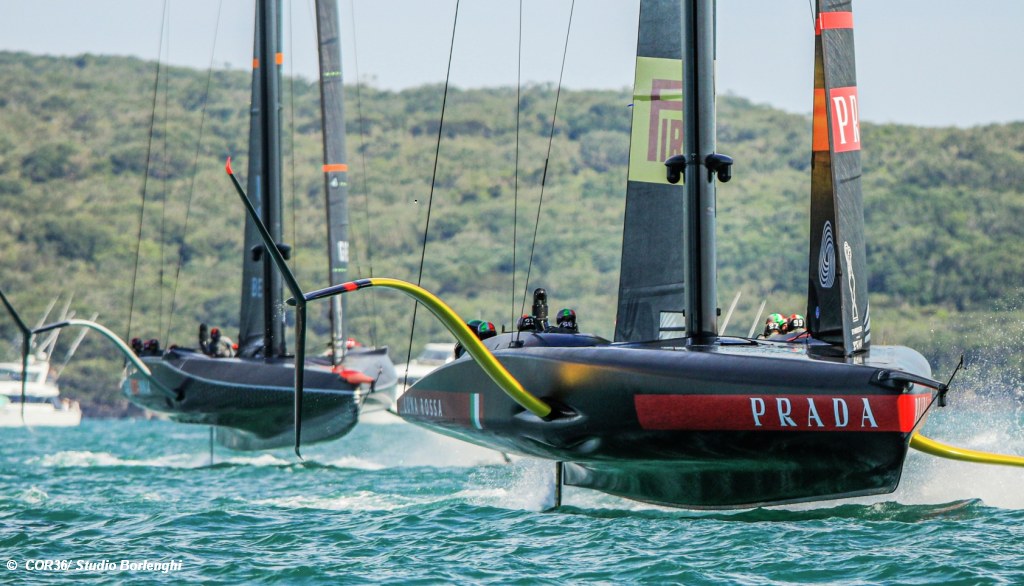 Race 8, the last chance for Ben Ainslie and Ineos Team UK to keep the dream alive, it was win or go home. Fireworks were expected at the start as the Brits had to dominate this one to stand any chance.

Ainslie won the messy start with Luna Rossa crossing the line early and Ineos heading to the LH boundary before tacking back to cross Luna Rosa by 30 metres. But by the second cross Luna Rossa had the lead with a 50 metre cross ahead of Ineos, to lead at gate 1 by 12 sec.

“We’re going to have to do something special here Gilo” was the message from Ainslie to Tactician Giles Scott, as the Italians’ light wind advantage was clear again, gaining in every manoeuvre.

From then on it was essentially a case of sailing safely to the finish where Luna Rossa took a 56 sec race win and 7 – 1 overall victory to win the Prada Cup Final, and become the 36th official challenger for the America’s Cup.

This is the second time in six attempts that they will challenge and as they did 21 years ago, Luna Rossa Prada Pirelli will face the Defender Emirates Team New Zealand on the Hauraki Gulf to decide who will win the oldest trophy in international sport.

Luna Rossa co-helmsman Jimmy Spithill . . . “We kept the mistakes down, stayed calm, made good decisions and the boat did the job. Pretty good day at the office.”

Ben Ainslie, Ineos Team UK Skipper congratulated his opponents . . . “Well done to Luna Rossa and well done to Italy. It’s a big deal in Italy to get into the America’s Cup again. So congratulations to the team, to Jimmy and Checco and all the boys, they sailed brilliantly and deserve to take the Final.”