Chaos reigns at the 36th America’s Cup in Auckland as the New Zealand Government extended the coronavirus lockdown at level 2, which continues the restriction on public gatherings.

Luna Rossa, the Challenger of Record America’s Cup 36 (COR 36) – the organizer of the PRADA Cup – has issued a statement urging ACE to . . .

‘request an exemption to carry on the Final of the PRADA Cup in compliance with the Racing Calendar and in order to meet the legitimate expectations of the competitors involved, of the international public and of the international television networks who have already programmed their broadcastings.’

COR 36 is asking that ACE and the local authorities immediately implement the Level 3 Alert management plan provided for by the AC36 Event COVID-19 Management On Land and On Water Plans.

These plans provide that, in a level 3 COVID-19 alert, the AC36 Village shall be closed and the regattas shall resume “behind closed doors”, without any public, as it already happens for many international sporting events (Formula 1, Australian Open etc.).

And restart the Prada Cup Final racing  as early as Friday 19 February.

‘This on water management plan has already been tested and can therefore be immediately activated with the approval of the Authorities.’ 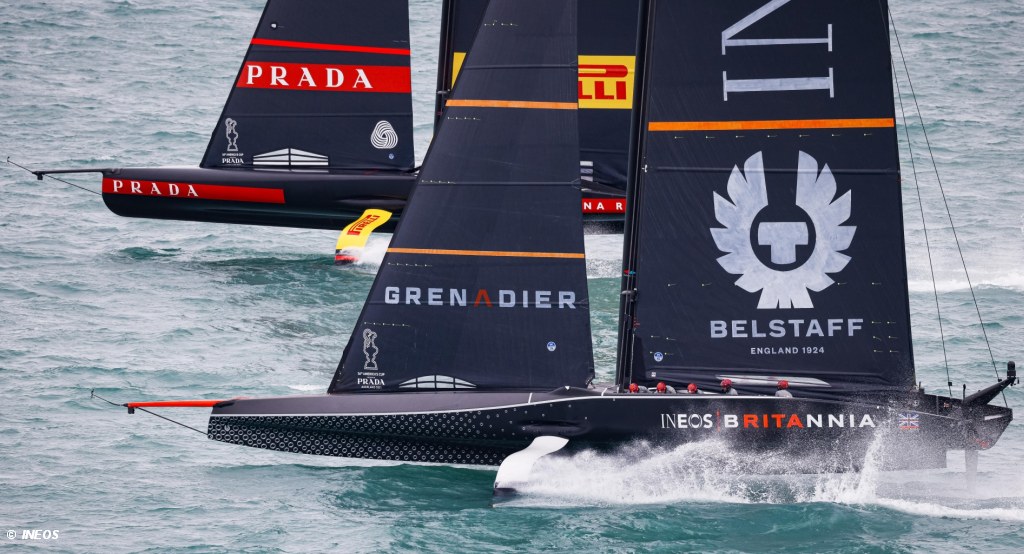 Otherwise Rule A2.3(b) of Appendix A to the World Sailing Racing Rules of Sailing America’s Cup edition Version 3.03 for the 36th America’s Cup presented by PRADA – which provide that “ . . . the winner is the team with the highest score at the date of the final scheduled date” – would apply.

If no further racing took place this action would declare the Italian team Lina Rossa the winner of the Prada Cup Final.

‘COR 36 hopes not to apply this provision and that an exemption to allow racing at the scheduled dates will be granted.’

Luna Ross lead by 4 to 0 in the first to win seven race Prada Cup Final versus Ineos Team UK.

INEOS Team UK issued a statement which said that they respect the decision communicated by ACE to delay the Prada Cup racing due to the current COVID-19 alert level in Auckland.

And that they will continue with their race preparations and be ready to race when it is safe to do so.

Challenger of Record 36 will held a Press Briefing

The Challenger of Record 36 will held a Press Briefing tomorrow, 18 February 2021, at 11 AM, at the PRADA Media Centre Conference room to express its position with regard to the racing calendar of the PRADA Cup Final.

Goodison explains how the powerful AC75 rig is controlled