Some time ago there was an interesting article on Jack Chippendale, one of the major builders of Fifteens in the Sixties.

Although quite a few of the boats survive, we are quite fortunate in that what are believed to be the first and last of his boats still exist and are both in great shape.

FF396 ‘Flicka’ was registered in August 1960 and is the first Chippendale to appear on the FF Register. She is now owned and superbly restored by Brett Dingwall.

FF1155 ‘Squall’ was registered in June 1968, being measured by S.A.Potter and, according to the FF Register, appears to be the last one built.

Unlike some boats, she has retained her name throughout her life and according to my year books seems to have been based mainly in the south of the country, where she made a name for herself on the open circuit before ending up in South Wales at Cardiff Bay SC.

I first came across Squall at an open meeting and remember being struck by her lovely honey coloured varnished hull and also an unusual modification in relation to her keel. 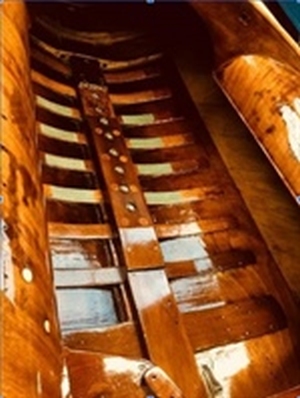 Before the rules were tightened up, people were not only playing around with hull shapes, but also keels, and Squall had been fitted with a keel by Ian Howlett, who was also building boats at the time and which were proving to be fast.

The keel features a pronounced bulb, keeping the weight very low, with hollowed out after sections and a distinctive spine along the upper trailing edge, which I assume helps improve lateral resistance.

The top flange is also quite thin and to cope with this, the mounting bolts were placed in a single line down the centre, with a substantial beam inside the boat to take the twisting stresses.

At the time the rules only specified 12 mounting bolts and I understand that this arrangement, along with other aspects of the keel design, caused some consternation within the class.

Such that the rules were changed to specify mounting the 12 bolts in pairs, with the total number now of course subsequently reduced to 8.

It is a long way to Cardiff from Thirsk, but Duncan is a complete gent and insisted on bringing Squall halfway to Birmingham, where he handed her over to me at a service station at the top of the M5.

That was in 2014. Squall sat in the garage until 2019 until I was able to clear other commitments and give her some attention.

Despite years of hard racing, the boat was in remarkably good condition, with no rot or major damage and just needed a full refresh and refit. She still has her original deck, the famous Howlett keel, a modern rudder and Superspar mast, with a good set of Goacher sails. Plenty good enough to go racing again. 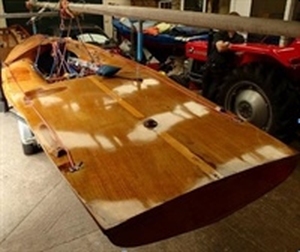 The only downside was that water ingress under the single pack varnish had been repaired locally with epoxy varnish, giving a dappled effect which, I was unable to remove when the varnish came off.

A test with two-pack didn’t resolve the difference and sadly I took the decision to paint the hull and put painted panels on the deck in the style of Fifteens built in the sixties when Squall was new.

Below the waterline has been coated with Durepox to give a fine finish on an already fair hull. Many hours of sanding and painting later and I am very happy with the result and the boat looks very smart.

Since completing the refit, I have only had chance to sail Squall once, at Notts County, when I was grateful to another classic sailor, Jeremy Arnold, for crewing for me.

First impressions? Already owning a Chippendale, I was prepared for the ease of handling and lightness of helm that seems to come with these boats, but I was impressed with Squall’s ability to track and her speed Upwind as we got used to the boat.

The rig was already well set up, so is that Howlett keel working its magic? Squall was built from the Mk2 mould, so there may be something there, although with the performance of 396 after her rebuild, Brett may disagree!

We’ll have to see, as hopefully 2021 will allow me to take Squall to some events if the coronavirus restrictions are eased and some sense of normality returns.

I left Notts County very happy and with the definite impression of more to come from a boat now into her second half-century.

Thanks, Jack. You got it right, first to last.
Graham Lamond

Extasea on record pace in Melbourne to Devonport race