The third race of the NSW 18ft Skiff Championship was a win for the current Australian champion tech2 team of Jack Macartney, Charlie Wyatt and Lewis Brake.

They won the race by 26s from the defending champion Winning Group team of John Winning Jr, Seve Jarvin and Sam Newton.

The Andoo team of Marcus Ashley-Jones, Cam Gundy and Rhys Mara, was with the leading group throughout the entire race and thoroughly deserved the third place.

The race had everything. Absolutely sensational spinnaker action as the fleet raced from Kurraba Point in the west to Rose Bay in the east.

Close ‘match’ racing throughout the fleet on the three long upwind legs, lead changes, and all surpassed by one of the best comeback victories in a nail-biting finish. 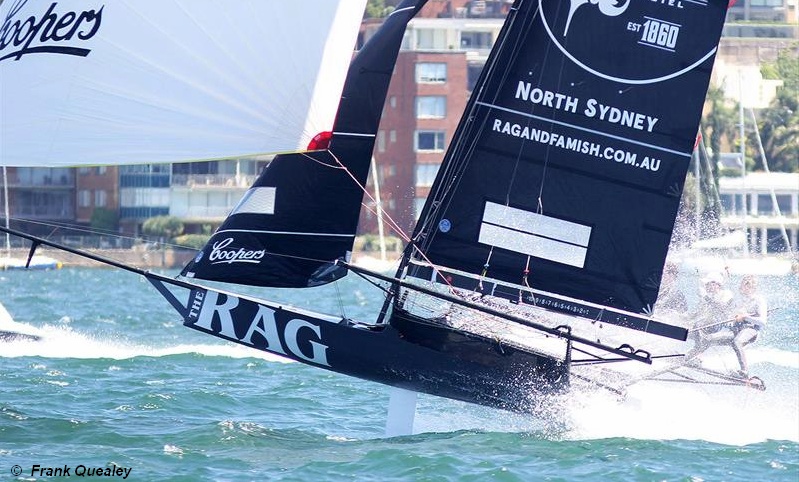 From the start, the interest was centred on the two leading teams tech2 and Winning Group and the fans weren’t disappointed as the two champion teams raced around the first lap of the course with only 12s between themselves.

Spectators were settling in for a great ‘match race’ situation when the race was turned on its head as tech2 got caught in a 40-degree windshist and ‘capsized’ off Bradleys Head.

For the next 10-15 minutes, the tech2 team struggled to get back up to speed and lost three placings before the fleet reached Kurraba Point mark for the second time.

At that point tech2 was now more than one minute behind Winning Group, Smeg and Andoo.

But, the boat’s all-round speed over the next two legs of the course back to Kurraba Point, put them narrowly ahead of Winning Group and Andoo as the trio headed off on a ‘tight’ spinnaker run to the finish line off Clark Island.

The wind direction forced all three teams to lower their spinnakers to cross the finish line and it wasn’t until 50 metres from the finish line that the winner finally became obvious.

America's Cup - Prada step in to preserve freedom of the press