The Great Britain SailGP team have a mountain to climb at the final stage for the first season of the SailGP event.

The teams are in Marseille for the inaugural SailGP final – where all six foiling wingsailed catamarans will battle it out with a winner-takes-all $1,000,000 match race on the final day.

The Event has been dominated by the two Aussie skippered teams, Australia with Tom Slingsby and Japan with Nathan Outteridge. Between them they have taken first and second at each of the four events sailed to date, Australia winning 3 and Japan 1. 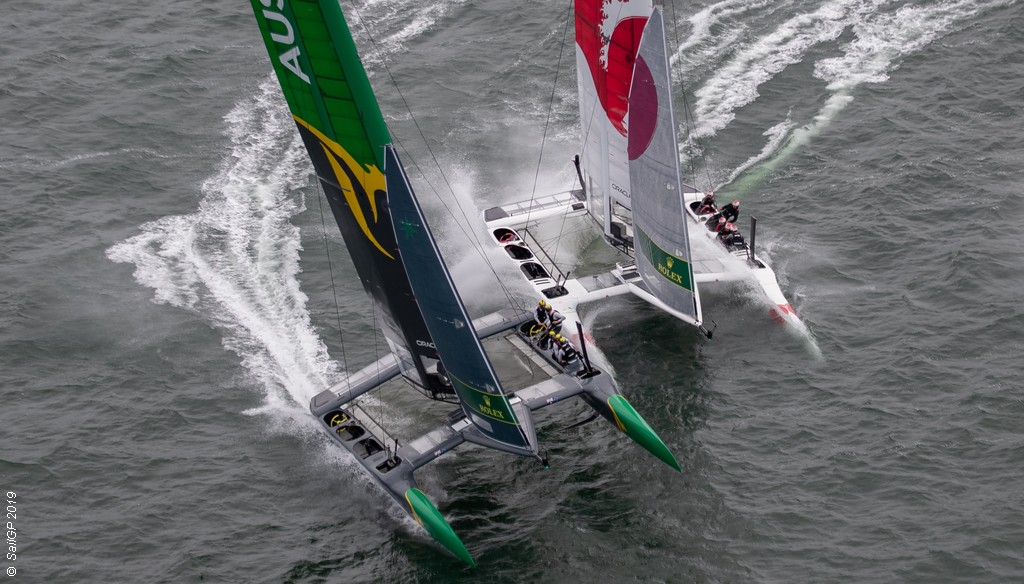 Australia and Japan now top the leaderboard with a 40+ point advantage over the third placed USA  team skippered by Rome Kirby. Sitting in fourth place, 45 points off the two leaders, are Dylan Fletcher and the GB SailGP team.

After the first two events where the Brits held onto third place, things took a down-turn with wipe-outs in New York and then in Cowes where they finished last in both events.

So how will Fletcher and the GB SailGP team overcome this huge point discrepancy?

Well, according to the latest team PR they have accepted that the one-million-dollar match race final is beyond them, and are concentrating on a third-place podium position.

Even if they, or the USA, were to win all eight races they would need Australia and Japan to suddenly crash and burn before they could make the final.

Their best hope is for an equipment malfunction removing one or both leaders at some point, but weather conditions look mild, with the light winds picking up on Saturday and Sunday to provide ideal racing conditions.

It might not be what Russell Coutts had in mind for the first grand final, but if Fletcher could pull it off it would stand beside the fantastic efforts of Ben Stokes in the third Ashes test . . . and might even get the mainstream media headlines that SailGP have obviously been aiming for.

There are training days and practice races Wednesday and Thursday, but as the British Team have found, breaking records and winning races outside the actual race days does not win points or prizes.

As the two Aussie skippers have shown, ‘you have to be in it to win it’ and so far the British team has only survived two out of four events in a competitive position.

Fletcher and SailGP flight controller and 49er crew Stuart Bithell have stressed how fortunate they were that this opportunity came along, when they were struggling with their 49er Olympic campaign.

The financial boost eased the way, perhaps why the RYA agreed to their taking on this major programme at such a critical time in the British team Olympic cycle.

Incidently, they will know if they have made Team GB for Tokyo 2020 when the first round of selections are announced a week later on Tuesday 1 October.

The final event in Marseille features more fleet races, with three races per day, over the Friday and Saturday (20, 21 Sep), then with two final fleet races on the Sunday (22 Sep).

The two overall leaders at that point then sail one Final Match Race for the SailGP Championship and the $1,000,000 prize pot. Spot the difference . . . First there was SailGP . . . Now there is eSailGP