Ben Remocker, the 49er and Nacra 17 Class Manager, has posted an article on the 49er Class Association website outlining the new fees on Olympic sailors equipment that World Sailing is introducing without a vote of council.

The article issued by the Olympic Classes Sub Committee states:

The new Olympic contracts, which each Olympic class for 2024 must sign by August 1st, includes a new 1% fee on all equipment sales that will pull an estimated $300,000 annually from the pockets of Olympic and non-Olympic sailors.

Each sailing class currently pays fees that are set in World Sailing regulation of roughly 0.4% of the cost of a new hull, down to smaller percentages of the hull costs for more expensive boats.

By adding an additional 1% fee and applying it to all Olympic equipment, not just the hulls, the fees on Olympic sailors will nearly treble.

The normal fees, called ‘hull plaques’ have all details of the fee schedule set out in regulation. Changes to these fees and any others must be debated by the World Sailing Council to be implemented. 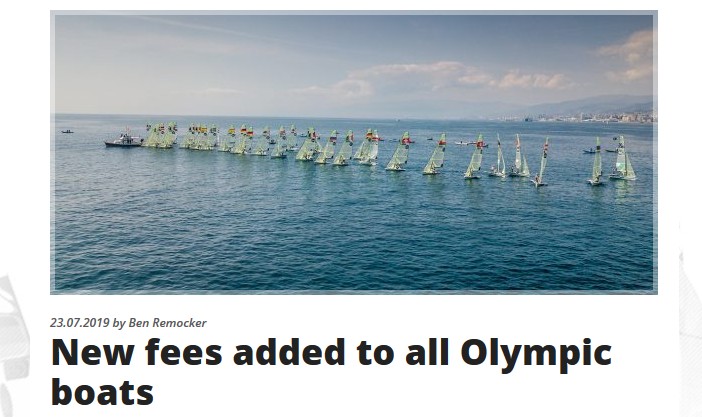 In order to bypass the normal system of debate and discussion, the World Sailing Board of Directors has instead added this new fee to the Olympic contracts which include confidentiality clauses once signed.

The Olympic sailors already bring in $4 million USD per year via the IOC for World Sailing.

In this situation, the 1% fee will not only concern equipment bought by Olympic campaigners but will also impact all level of sailors from youth to masters and clubs.

Charging the Olympic sailors is an easy way for World Sailing to add revenue, since in order to pursue the Olympic dreams the sailors must buy the equipment used in the Olympics.

In bypassing the normal system of debate on all Olympic matters, the World Sailing Board is side stepping the transparency, safeguards, and debate that normally occurs.

Using the Olympic contract as a vehicle to add fees to sailors via the class associations and manufacturers is not democratic and should not be how World Sailing operates.

All of the stakeholders within Olympic sailing should be debating this new fee, and council should ultimately decide if it is in the best interest of the sport.

The Olympic Classes presented this argument to the board in protest over the proposed contract since the 2017 November conference in Puerto Vallarta, but the board is holding firm knowing that the drive to be Olympic will force classes and builders to all sign the contract.

The Olympic Classes will be jointly proposing a submission for debate in November to explicitly disallow the addition of fees via the Olympic contracts and impact over the whole sport spectrum.