In what ended up being a game of two halves the 505 Barcelona Exhibition Regatta was won convincingly by newcomers Penny and Russ Clark (GBR).

On Day 1, in 15 – 20 knots and choppy seas Higgins and Johnson gave everyone a lesson in how to sail a 505 in windy conditions with 4 firsts and 1 second place.

Day 2 was somewhat lighter with 7-12 knots but the chop had, if anything, increased on top of a rolling swell which bounced back off the seawall of the Barcelona International Sailing Centre.

In what can only be described as a clinical demolition, Penny and Russ Clark dominated day two in conditions described by the highly experienced & successful multi class Australian Mal Higgins as “the most difficult sailing conditions I have ever had to race in”. 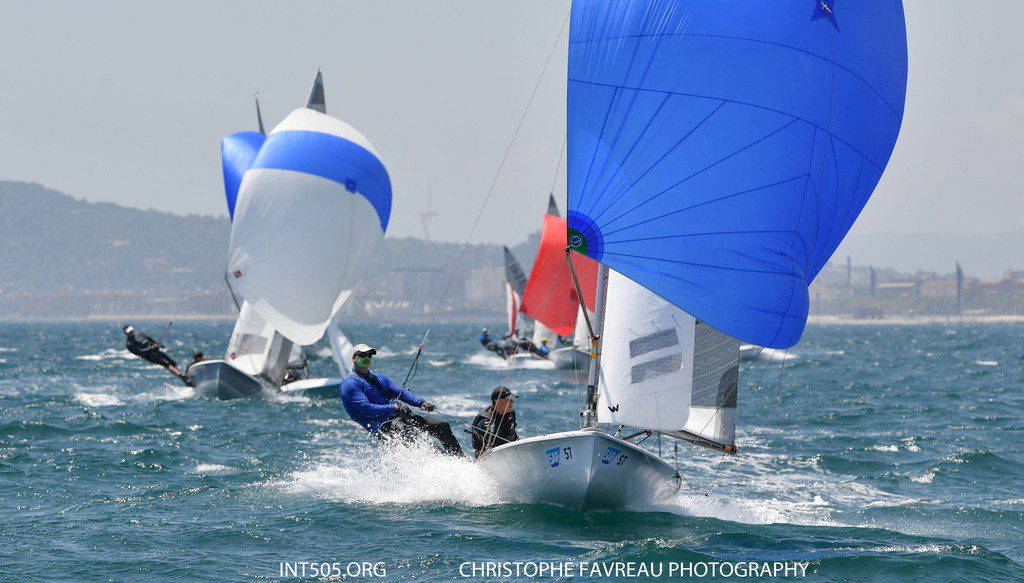 In the end Penny and Russ won the event in convincing fashion with an impressive display of consistent boat speed and intelligent racing against some of the best dinghy and skiff sailors around.

Penny, an Olympic medallist said; Russ and I have raced 470s, Fireballs, and many other dinghies and skiffs together but the 5o5 is the only one that really suits our weight. It’s also an awesome boat and great people to sail with.

We were able to borrow the UK association boat to go to the Worlds in Australia which was an easy way to experience the class before we bought our own boat. Everyone has been so helpful with tips, logistics and resources we have been able to go to great regattas and get up to speed quickly.

“In the meantime there will be some great opportunities for racing in Spain and for Spanish sailors to try out what is generally considered as the best two person sailing boat on the planet.”

The next international event for the Class will be Leg 3 of the Euro Cup in Kiel, 22 to 25 June.

The 5o5 2019 European Championships will be held from 6 to 10 August in Sonderborg Yacht Club, Denmark.