A cracking stiff breeze opened the third day of Cowes Classics Week with welcomed starts for the one design and cruiser classes after Tuesday’s gale-enforced postponement.

Wind over tide with gusts building up to 28 knots in parts of the race area by lunchtime characterised the challenges of the day.

One group which managed to find relatively peaceful conditions away from the bumpy mid-Solent was the committee boat race area for the Swallows, Vintage Dragons, Flying Fifteens and Bembridge One Designs, sponsored by Robert Oatley Wines.

The 15 strong Swallow class originating as a two-man Olympic class for the 1948 Olympics but is now sailed with three crew. The class has developed into a thoroughly modern classic as demonstrated by the competition on the water.

Mike Wigmore in Gwaihir showed that he was coming back to defend his previous 2017 and 2018 titles when he added todays’ three races to his first position of Monday to keep him ahead. Harry Roome in Skua was today’s scratch boat, with two wins but a no-show for the final race.

The Bembridge One Designs were also able to get three races in. The strict one design fleet, which is resident at Bembridge Sailing Club is a close relative of the Alfred Westmacott designed XOD, both over 100 years old. 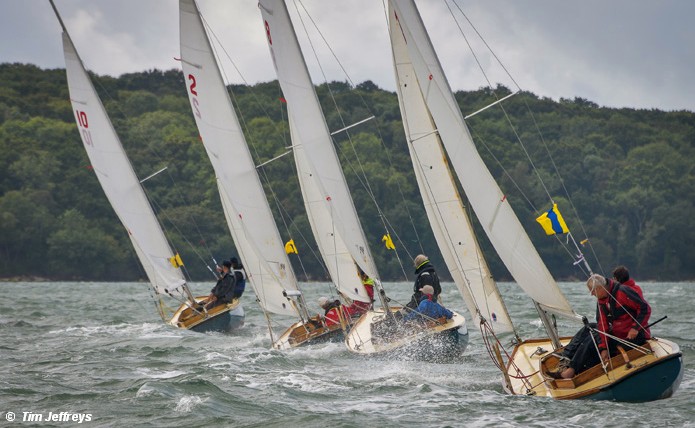 Hugh Doherty sailed BOD10 into the lead today with a 1,2,3 with wins also going to last year’s BOD Champion Russ Fowler in BOD1 and Charles Able-Smith in BOD7.

Further north towards the mainland shore conditions were even more lively. The XOD fleet, the largest in the event, with 37 entries, was dominated by Roger Yeoman sailing Xcitation, finishing today one point ahead of another previous Cowes Classics Week champion Max Crowe with Clair de Lune.

The cruiser classes, which start from the shoreline of the organising club, the Royal London Yacht Club, also had their work cut out. The Folkboats, along with the Classic Cruisers and Gaffers raced in the mid Solent around fixed racing marks.

Amongst these were the Gaffers including Spinaway X , here for her third year with owners Angela and Andrew Hitt. Spinaway X is the oldest yacht in the fleet.

Originally built as a west country fishing boat, as the name of her design, a Plymouth Hooker, aptly describes her, Spinaway X was built in 1889 and has been well cared for through her career.

Racing continues Thursday and Friday. The Darings, Vintage Dragons, and a host of other boats, all of whom are designs of more than 50 years old, will be on the start lines along with a others including Twisters, Contessa 26s and, for one day only, the Seaview Mermaid fleet will take part.

Wins for Australia and The Bahamas at 5.5 Metre Worlds