Day 4 of Salcombe Gin Merlin Week and the top 5 are lining up to take the title.

The discard has not yet kicked in but if it had then the top positions are very close and look like this . . .

It is hard to see the winner coming from outside these top 5. 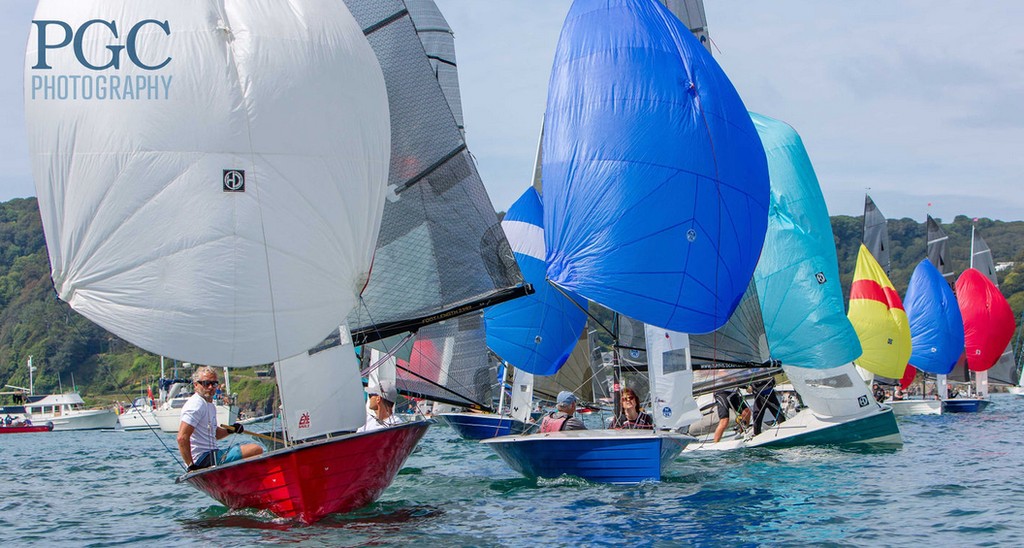 Morning Race – Blue v Black flights – For the first time this week there was a clean start. The majority of the fleet elected to start on the Portlemouth shore with Si Blake and Phil Dalby making of the best of it.

Roger and Jane Gilbert chose to start further out into the stream on port but with more pressure and soon slipped into second chasing Si and Phil out past Blackstone.

The Gilberts remained untroubled in the lead and sailed confidently through to take their second win of the week and put themselves right in the mix for the title.

Mike and Jane Calvert held onto a long port tack away from Crossways to sail through and take second place.

Afternoon Race – Green v Red flights – At the second start, the wind switched left allowing those who had positioned towards the Portlemouth shore to tack on to port and fly up the harbour with the tide under them.

The leading breakaway group of four to Blackstone were Taxi and Pippa Kilsby, Jenny and Chris Dodds, Richard Whitworth and stand in crew for the day Beka Jones and Steve Crook with Sally Townend.

Slowly the chasing group closed the gap to the leaders with Alex Jackson and Mary Henderson recapturing their form of the first two days to climb through to second at the line behind Taxi and Pippa who took their first win of the week.