Winner of the National Swallow 2019 Championship held at Bembridge SC over the weekend was Harry Roome sailing with Prue and Charlie Roome on Skua.

The close competition between Skua (S3) and Gwaihir (S93) of Mark Struckett, Keith Bliss and Mike Wigmore, came down the final race with the win for Roome giving them the title on count -back.

Skua, Gwaihir and Osprey dominated the first day with Gwaihir winning two races after Skua had taken the opening race. This put Gwahir in first place with 4 points, Skua was second with 6 points and Migrant third with 13 points. 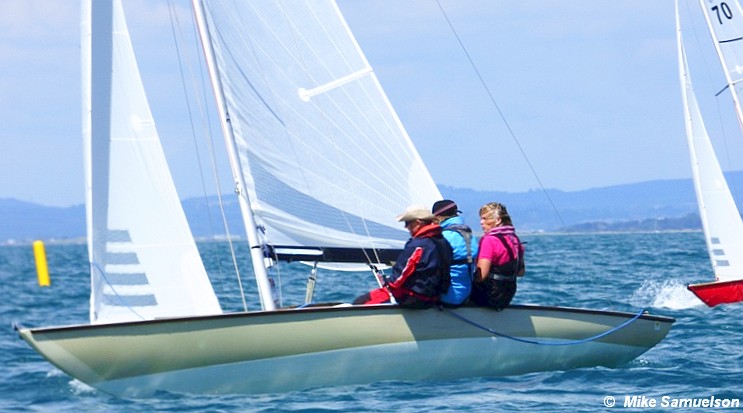 Racing on Day 2 started in an 8 to 10 knot South Easterly.

Skua soon established a comfortable lead ahead of Gwahir and S67 (Solitude) helmed by Anthony Lunch, with John Houghton and Andrew Reid.

However, Skua needed to be two places ahead of Gwahir to win the Championships, and the final beat became a match race, with Skua taking the race win and also holding Gwahir up enough for Solitude to snatch second, a mere 5 seconds separating the three of them.

This put Skua and Gwahir on level points and level places (2 firsts, 1 second & 1 third), but with a first in the final race, overall victory went to Harry, Prue and Charlie Roome in Skua.

An excellent weekend’s racing and Bembridge SC looks forward to welcoming the Swallows again for their Nationals in three years time.

The Swallow keelboat was designed by Tom Thorneycroft for the 1948 London Olympic Games where the sailing events were held in Torbay.  Although designed for a crew of two they are more frequently sailed three up.  Fleets are based at Itchenor and Aldeburgh Sailing Clubs.