Day 2 of the Trofeo Princesa Sofia Iberostar regatta on Mallorca and again some lack of wind early this morning, but they got afloat as the sea breeze built to provide some decent conditions.

In the 49er Dylan Fletcher and Stuart BIithell sit one point behind new Aussie leaders Kurt Hansen and Simon Hoffman, while James Peters and Fynn Sterritt still carry a UFD down in 28th place.

Hannah Mills and Eilidh McIntyre salvaged a third place in the 470, but Camille Lecointre and Aloise Retronaz of France are opening the gap in the lead.

The women’s 49erFX is a very close series with Charlotte Dobson and Saskia Tidey tied for the lead with Alexandra Maloney and Molly Meech of New Zealand, and Brazil’s Martine Grael and Kahena Kunze just a point back.

Lorenzo Chiavarini (image above) is the best placed British Laser sailor in fourth, with Hermann Tomasgaard of Norway holding a one point lead ahead of Ireland’s Finn Lynch.

In the Radial, Denmark’s Anne-Marie Rindom has won all four of her races to lead from Maud Jayet of Switzerland.

The RS:X got underway and Bryony Shaw finished two of the three races to place sixth behind overall leader Jie Du of China. In the men’s event Britain’s Andy Brown (image below) took his first senior race win and is fifth overall behind leader Mateo Sanz Lanz of Switzerland. 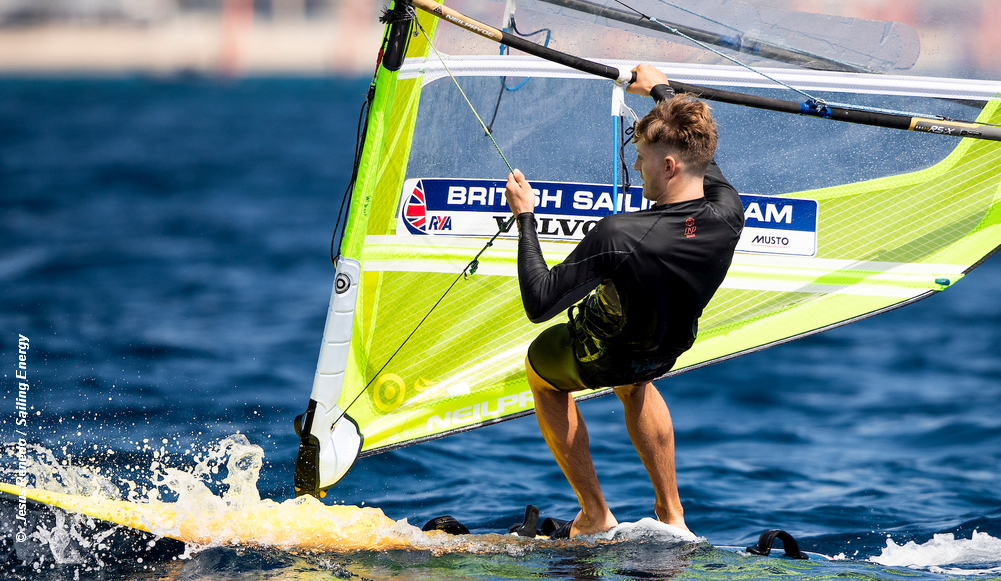 Britain’s Andy Brown (13,1,DNC) is in fifth place. Israel’s Yoav Cohen won hte first race but did not compete in races 2 and 3.

The women’s 49erFX series added another three qualifier race for their flights.

Racing underway for the first 49er qualifying races, split in three flights due to number of entries (108).

The Nacra 17 managed another three races for their two flights, overall leaders are Ruggero Tita and Caterina Banti of Italy.

Second are Gemma Jones and Jason Saunders of New Zealand and in third place are Germany’s Paul Kohlhoff and Alica Stuhlemmer.