Day 2 of the IRC Nationals at Cowes

While in some classes the leaderboard remains tight going into Sunday’s final day, in others there are some exceptional, stand-out performances.

One of the tightest fights is taking place among the biggest boats in IRC 1 where the tables were turned with David Collins’ IRC 52 Tala getting the better of Tony Langley’s Gladiator, posting a 1-2-1 to the polished 52 Super Series team’s 2-1-2. 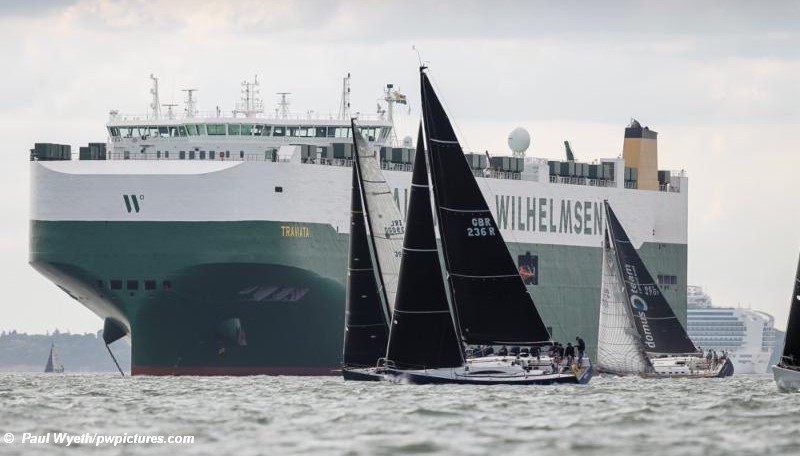 The most competitive class here is also the biggest – IRC 2, with 22 boats, including the whole Performance 40 fleet.

Overall Stuart Sawyer’s Falmouth-based IRC Nationals first timers on their J/122 Black Dog continued to score well. A 1-4-2 Saturoday has left them with a 15 point lead ahead of the Blair family’s King 40 Cobra.

The Goubau family from Belgium had an excellent day on their Beneteau 47.7 Moana, posting a 4-2-4, while also on the ascent was Adam Gosling’s fine crew, including double Olympic 470 silver medallist Nick Rogers, on the JPK 11.80 Yes! whose 5-3-1 Saturday has elevated them to fourth overall.

Saturday’s third winner in IRC 2 was the all-star cast, including Andrew Cape and Jerry Hill, on board Robert Bicket’s Fargo.

One point off having a perfect scoreline is the leader in IRC 3, David Franks’ J/112E Leon, which scored straight wins, despite having one of her crew Medevaced off with a head injury.

Leon’s six point lead is still vulnerable, but the dominance of the 2012 IRC National Champions is such that sisterships, Xanadoo and Happy Daize, plus the First 40.7 Incognito, are most likely to be left fighting for the remaining podium positions.

On a roll after his exemplary 1-2-1 Saturday is Christopher Preston’s J/109 Jubilee.

However while they posted a third win, they are facing increasing ferocious competition from defending IRC National Champion, Giovanni Belgrano’s and his 1939 vintage Laurent Giles-designed classic Whooper.

Racing continues Sunday with a third and final day with an impossibly light forecast when ‘no racing can possibly happen’.