Final day of the Hayling Island SC Regatta with some added breeze to provide a fitting finish to a great weekend’s racing.

The Tasar Nationals still have a day of racing on Monday, but Paul and Bronwyn Ridgway from Leigh & Lowton SC have one hand on the title, as they added another two race wins to their scoreline to take a five point lead ahead of Willem and Luna Schutte (2,2,2) from ZV Noord AA.

In third place after six races are Ian Swann and Graham Williamson of HISC, who won the first race of the day, but spoilt it all with a 15 in the final race. 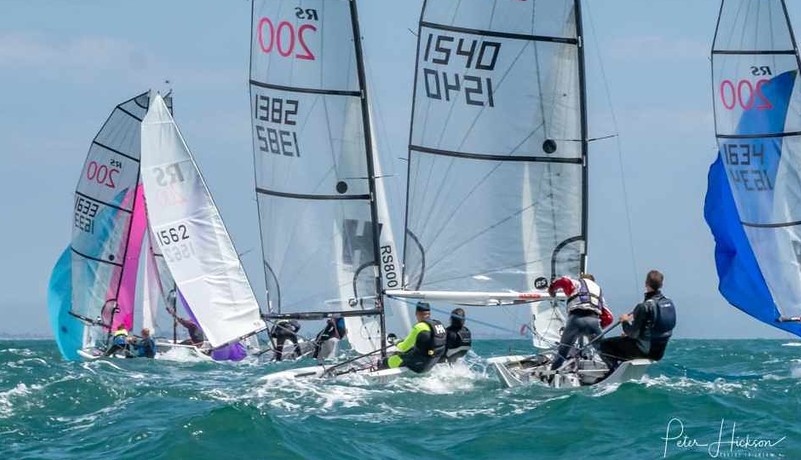 In the RS200 fleet Matt Mee and Emma Norris from Burghfield SC finished 3 points clear of HISC’s Tom and Jo Hewitson, with Tom and Charlie Darling finishing a point back in third.

Dan Vincent of Stokes Bay SC took two race wins to move into the lead of the in the RS700/Musto Skiff fleet, with Theo Galyer of HISC finishing in second and in third Ian Nolan of Snettisham Beach SC.

Racing was tight in the RS800 fleet where HISC’s Tom Morris and Elliott Wells (3,1,1) took the win although they remained tied on 5 points with Luke and Emma McEwen (2,2,1) of the Royal Lymington YC.

The International 14 class, racing for the venerable Hayling Hull Trophy, was won by Neale Jones and Ed FitzGerald from Itchenor SC winning all four races.

Second were Archie Massey and Harvey Hillary, and in third Andrew Partington and James.

The keelboat class, the RS Elite, saw a dramatic change of leaders, with Colin and Paul Smith and Anna Wells taking a 1 point victory ahead of Paul and Caroline Fisk and Richard Tucker, with over night leaders Peter Copsey, Trevor and Henry, finally finishing in third.

In the Solo fleet, Stuart Godwin rounded out his series with two more wins to finish 3 points clear of Nick Rawlings, with third Richie Bailey.

Dominic Hall in a Laser, won the Slow Handicap event, finishing just 1 point ahead of Paul Childs in an OK, with third Jason Hardman in an Aero 7.

While in the Fast Handicap the Inter Canoe of Mark Goodchild finished with three race wins and a 2 point victory over Ollie Houseman and Jeremy Vines from the Tamesis Club, sailing a National 18.

In third place were Jessica and Hugo Berney / Stephan Peritti also in a N18 from the Blackwater SC.