Friday Villasimius finally switched on its wind machine, allowing the full schedule of five races to be held for day 3 of the GC32 Villasimius Cup, the opening event of the 2019 GC32 Racing Tour.

After a windless morning the wisdom was that it might remain this way for the entire day. However after 11:00 the wind did fill and, after one aborted start, the race team got the first race off at 12:30 in a 10-12 knot southeasterly.

In this INEOS Rebels UK led for the first lap but were just short of the layline into the leeward gate and a difficult gybe opened the door for Oman Air to overtake. The Omani team maintained its lead around the next lap to claim its first win of season. 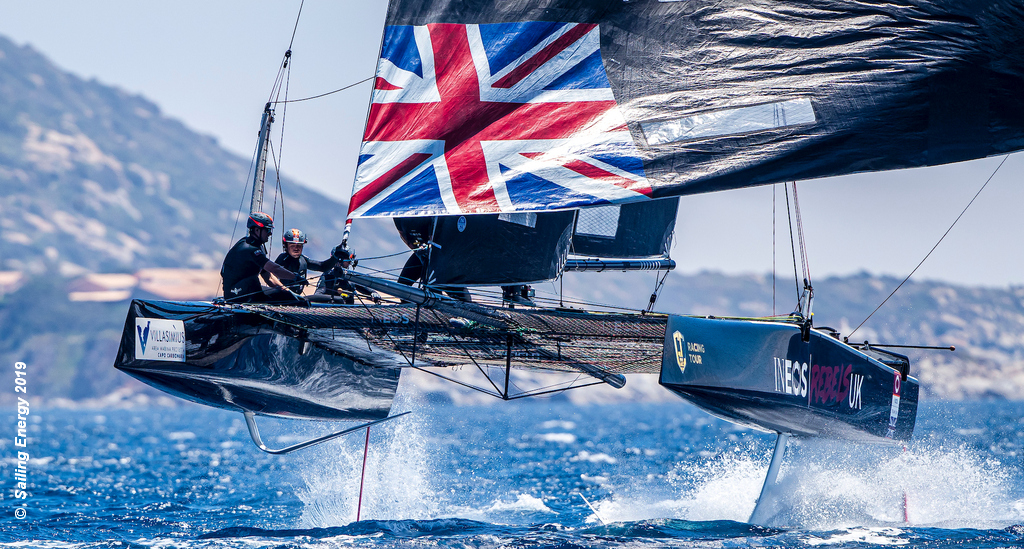 For race two the wind was gusting up to 20 knots and caused one of the most exciting performances in the GC32 Racing Tour’s five year history – the ten flying catamarans converged on the leeward gate with closing speeds of 50 knots.

In this it was the Phil Robertson skippered CHINAone NINGBO that led around the top mark and headed off down the left side of the run, while Franck Cammas’ NORAUTO split right.

The latter choice paid and the blue GC32 was first to scream into the leeward gate. Behind them the GC32s flying in on different gybes was like an aerobatics display.

This didn’t go so well for Zoulou and Red Bull Sailing Team that while attempting to avoid a collision, caused them to clash rigs, loping the masthead wind instruments off Red Bull. For this the on-the-water umpires awarded Zoulou a two point penalty.

Cammas and NORAUTO went on to win both this race and the next in which the Volvo Ocean Race winning skipper led from the first leg on.

For race four, it was the turn of not only a new team but an owner-driver to claim a win. American Jason Carroll’s Argo knows the way around the race track here having won the first GC32 Villasimius Cup in 2017. In addition Argo is racing a charter boat here, their boat having been held up in shipping.

Ernesto Bertarelli’s Alinghi had an up and down day. However the Swiss team excelled, posting a 2-2-1 leaving them fourth overall and leading the owner-driver championship from Argo at this half way stage.