Race day 1 got underway for the J/70, Melges 24, Viper 640 and Flying Tigers 7.5 at the Bacardi Invitational Regatta with an amazing sailing day in Biscayne Bay.

Three races were wrapped up for the J/70 fleet, with three different teams taking the race win glory, and it won’t be an easy task to grab victory amongst such super competitive talent.

Owner-driver Carlo Alberini on Calvi Network controls the leaderboard from scores of 2,6,1, and sits on a 3 point advantage over Surge (USA) helmed by Ryan McKillen with tactician Mark Mendelblatt. Two points behind in third is Monaco’s G-Spottino driven by Giangiacomo Serena di Lapigio. 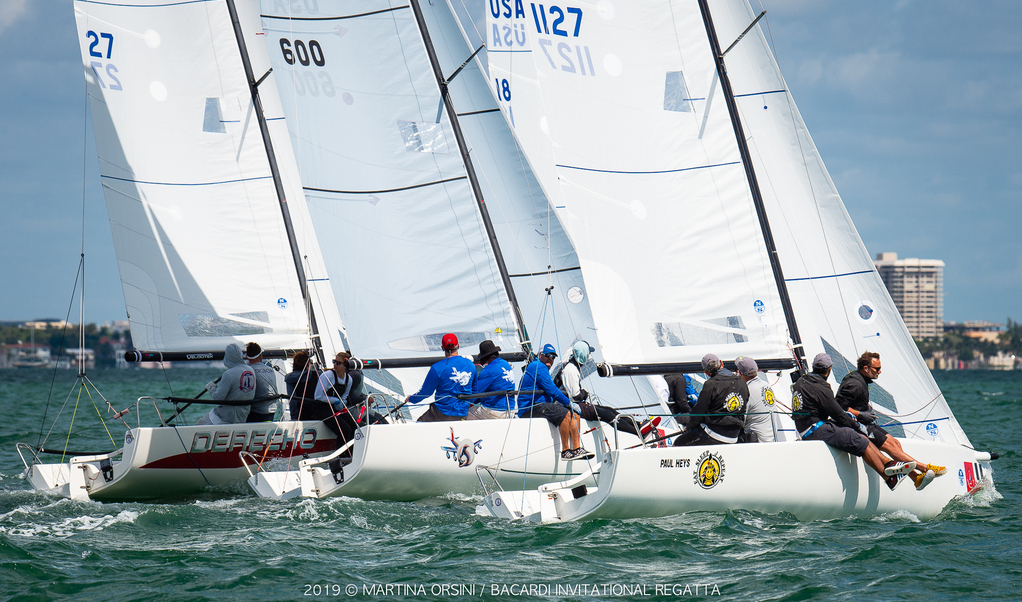 Getting to work straight away in the twenty-five boat Melges 24 fleet was the team on Full Throttle (USA), with Olympic champion Jonathan McKee calling tactics.

They made their intentions evidently clear by winning every race, leaving Italy’s Bombarda six points behind in second spot and MiKEY (USA) in third.

Two wins out of three in the Viper 640 were claimed by the Corinthian team Great Scott!slang (USA), and the other to last year’s North American champions on Jackpot (CAN).

Bobcat (CAN) is leading the scores in the Flying Tigers after three races.

They collected two seconds and one first, while just 1 point behind ‘9’ follows them from two wins and a fourth. Early days, but these two have already established a 7 point advantage over ‘1’ in third.

Back ashore, 500 very tired sailors were welcomed to the nightly Bacardi post-race party. After some relaxing and camaraderie, they will prepare for another intense Biscayne Bay sailing day tomorrow.