Back in February, Ian Walker, RYA Director of Racing, forecast a five-medal haul for Team GB sailing at Tokyo 2020. HIs optimism and faith in his squad has been justified in spades, and he can start planning for Paris 2024 and the new challenges that will bring. 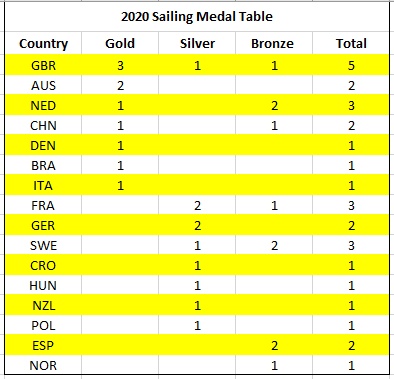 The medal winners included Giles Scott winning his second gold in the Finn class, continuing a GBR winning streak in the event stretching back to Iain Percy’s win in Sydney 2000 and including three wins for Ben Ainslie.

It was an especially poignant medal win as the class will be dropped from Paris 2024 and Scott has said these Games are likely to be his last.

Also leaving the Olympics is the 470 as a separate men and women’s event. The 470 will become a mixed crew event at Paris 2024.

In other changes to the sailing events, the RS:X board will be replaced by a foiling board for Paris 2024.

The second gold won by Hannah Mills together with her silver from 2012, makes her the most decorated female sailor.

While her crew, Elidh McIntyre has now equalled the gold won by her father, Mike McIntyre, in the Star class at 1988 Seoul Olympics.

Emma Wilson who won bronze on the RS:X board also has a family connection with the Games. Her mother, Penny Wilson (née Way) competed at the 1992 and 1996 Olympics.

The 49er skiff victory for Dylan Fletcher and Stuart Bithell is the first time Britain has taken Olympic gold in the class since its introduction in Sydney 2000.

And especially significant for the British pair, beating the defending champions and class dominating Pete Burling and Blair Tuke of New Zealand.