With Alex Thomson and Hugo Boss now out of the Vendee Globe and setting course for Cape Town, race leader Charlie Dalin (Apivia) is some 520 nautical miles west of the longitude of Cape of Good Hope.

Dalin is largely matching the pace of the hard pressing group that is chasing him led by Thomas Ruyant on LinkedOut.

Now into third place is Kevin Escoffier (PRB) his highest position in the race yet, but Jean Le Cam continues to impress with his super direct course, averaging just two to three knots less than the foiling boats to his south.

Escoffier may rank as a first timer in terms of solo racing in the southern ocean, but he has been the quickest over the 24 hours to 04:00 hrs this Sunday morning, breaking 480 miles to average over 20kts.

So too Sébastien Simon on the new Juan K designed ARKEA PAPREC who has been fast in seventh place. 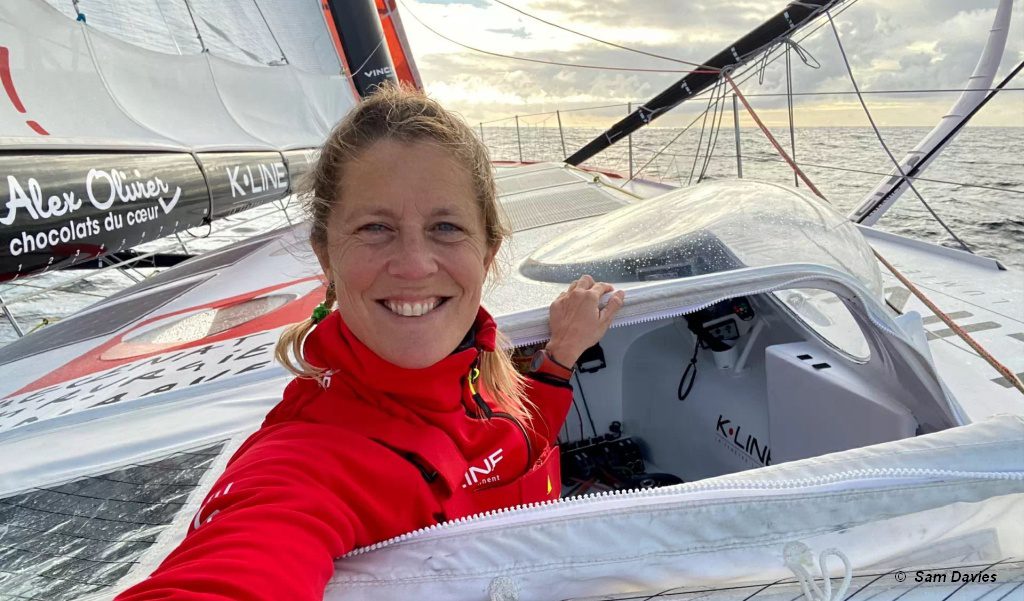 And just bBehind Simon is Britain’s Sam Davies on Initiatives-Coeur who gybed just before Gough Island, in the clement zone close behind the front – 25 knt TWS.

But as the breeze built and the instability arrived,  she furled the A7 in order to sail a clear enough course to pass safely to the South West of Gough.

Davies was then caught by a big surprise when the breeze went from 25 to 40 in the middle of the night for the first time,  with a little “wipe out” and Initiatives Coeur lay flat on her side with a nice cold wave breaking over her!

‘Ease all the sheets and back on our feet . . . that too is a scary manouver as you have to bear away but not too far so as to avoid a Chinese Gybe on the way out!’

So then the tricky bit is to find a trim and sail set-up for 22 to 42 knots of wind speed!

Not easy, when sailing solo and you need to rest a little and not stay all night in the cockpit with the sheets in your (cold) hands!

After a few more little wipeouts, the night was over with nothing  broken and the average wind speed starting to drop.

For Sam the next step is to put on a thicker pair of socks on . . . ‘because my feet are blocks of ice!’ . . . deploy a bigger sail and get going a bit faster.