Disappointed Charal skipper Jérémie Beyou sailed up the Les Sables d’Olonne channel Saturday afternoon to a strong welcome from well wishers who lined both sides of the seawalls.

The masked 44 year old skipper, who had to turn back after damage on just the third day of the race seemed especially moved by the messages of support.

A diver was already in the water as Charal docked and a thorough evaluation of all aspects of the boat will be made. He remained isolated all the time from the media and will return to a health bubble.

“If the boat can be repaired I want to go back.” Beyou emphasised.

Armel Tripon climbed the fifteen metres up the mast on board L’Occitane en Provence on Friday to refix his J3 sail and secure the rig.

A successful first ascent up the mast was completed on Friday. Armel has managed to re-set a sail to hold the boat’s mast in place, as a forestay – a major function of the broken J3.

The dangerous operation now carried out and he is able to use his mainsail and set the headsails fitted to the top of the mast.

He has fallen behind the leaders who are one weather system ahead, possibly being 1,000 miles behind at the Doldrums, and it will take 24 hours to get out of the area of light winds, to begin the chase again.

Following the passing of Storm Theta a number of Vendee Globe boats are recovering.

Earlier this morning, having successfully completed the planned gybe around storm Theta, Kojiro Shiraishi, Skipper of DMG MORI Global One, suffered a series of autopilot failures and gybed accidentally twice.

After switching to the back-up auto pilot the boat gybed accidentally again this time causing a large tear in the mainsail above the second batten and damage to the battens. At the time Kojiro was sailing conservatively with the J2 and two reefs in the main.

The Skipper is uninjured and the boat is not in any danger. The shore team is proposing different solutions to try to repair the mainsail and continue in the race. 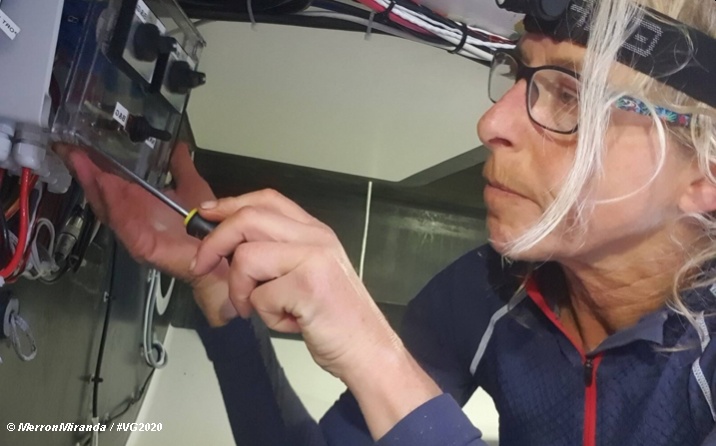 While a beclamed Miranda Merron on Campagne de France commented . . .

Given the distance, it’s a good thing to have two reliable working autopilots. So I was rather dismayed when the NKE autopilot stopped responding on day 2 of the race.

However, of bad things come good – the light airs provided the ideal time to sort out a couple of matters, and especially get the NKE autopilot working again.

David from NKE did an excellent job of helping me through the diagnosis. It did involve the use of a voltmeter and some re-wiring, something I might do once a decade.

Also Whatsapp via satellite is extraordinarily useful. Getting it working felt like a victory. I finished just before sunset.

Fabrice Amédéo, who left Les Sables d’Olonne on the evening of 10 November after his technical stoppage, is tacking near the cliffs of northern Spain.