Carl Fereday joined the Army to see the world, serving for 13 years, the latter part of which was with the Special Boat Services (SBS).

Since September 2019, however, Carl has been INEOS Team UK’s Rescue Swimmer. A transition that may not be as big as a leap as it may first appear.

Up until seven months ago Carl Fereday knew very little about the world of professional sailing and the America’s Cup. He had spent the majority of his working life serving in the British military.

After serving in the Royal Engineers as part of a Commando Brigade he then joined the SBS and that involved a lot of diving and boat action.

Carl left and fell into the private security sector, with a focus on superyachts. His roles included everything from training staff onboard superyachts to putting together teams onboard to tackle the piracy problem in Somalia.

It was at this time that he received an offer to join Ineos Team UK.

“As soon as I started looking at the big races in sailing I saw there have been lots of accidents and unfortunately lots of fatalities over the years. Straight away I knew that this would be a challenge and a role that was needed. That was what drew me in”.

With experience as both a Combat Swimmer and a PADI Rescue Diver it was clear that he was very well qualified for the job. For Carl, however, it was not just a case of taking the role and idly standing by until something happened.

He saw an opportunity, a role he could improve.

“It’s all about the speed of getting into the water, having the strength and skill to man-handle someone of that size, being able to swim and fin in currents or drift and the manoeuvrability of being able to get in and out of small awkward spaces. It is a very different role”. 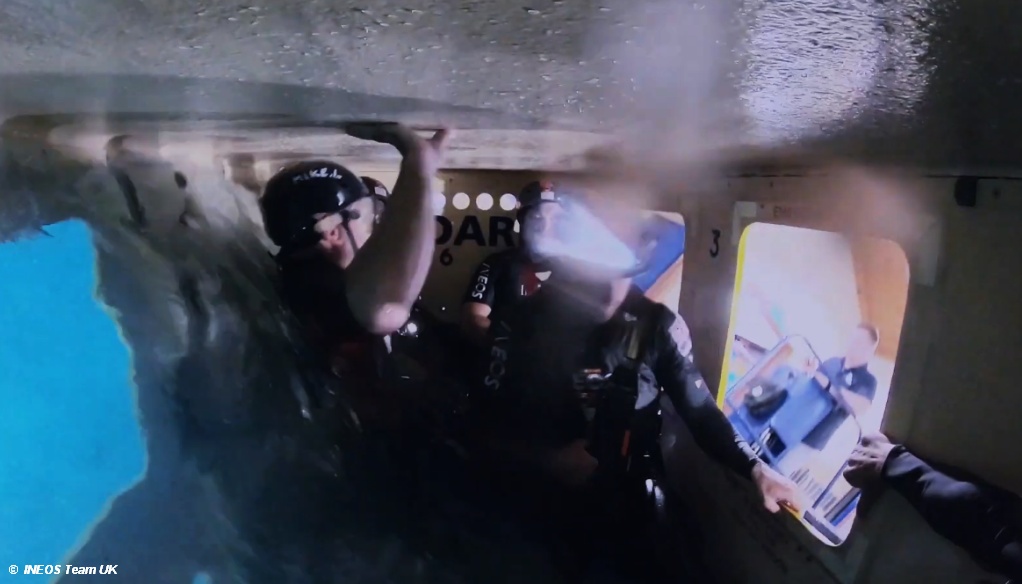 Being the Rescue Swimmer for an America’s Cup team is not simply a reactive job either. It is not just about diving into the water when things go wrong.

In fact, much of Carl’s role with the team is focussed on preparation and training to ensure the team is ready and prepared as best as possible in the circumstance that there is a major incident.

All of Carl’s and the team’s preparation was put to the test recently in an incident in Cagliari when ‘Britannia’ experienced a heavy crashdown in the Italian waters.

“We always have the comms on to the sailors onboard and as soon as anything happens, like with that incident, the first thing that will happen is we get the sailors to all number off to make sure they are all still onboard and all OK.”

“As soon as the incident happened I started final checks prior to getting into the water as we approached, but once we hear that everyone is OK, as was the case then, there is no need for me to get in.”

Carl’s secondary role on the team is as a medic so once they have confirmed everyone is onboard it’s then about checking in to see what minor injuries people may have, any cuts or bruises for example, and then seeing what treatment people need from there.

“I knew very little about the America’s Cup and I was so shocked to hear that Britain had never won it, it seems so wrong that that should be the case.”

“Obviously any former military person is going to tell you that they are very patriotic, so I absolutely want to see that rectified in this Cup. Hopefully we can change history!”