After day 2 of the Salcombe Gin Merlin Week, Richard Whitworth and Jemima Scroggie are tied for the lead with Alex Jackson and Mary Henderson.

After two more successful flight races for the 120 entries, the top 10 is already forming a familier look, with Roger and Jane Gilbert a point back in third, and Mike and Jane Calvert in fourth ahead of Will and Arthur Henderson on eight points in fifth.

Jackson and Henderson won the mmorning race ahead of Peter Ballantine and Rob Allen, while Roger and Jane Gilbert won the afternoon race ahead of Whitworth and Scroggie.

Early morning on day 2 of the Salcombe Gin Merlin Week and there was mist lying in the valleys of the estuary. By the start time the gradient F2 Easterly had cut down to the water, providing some lovely sailing conditions under clearing skies. 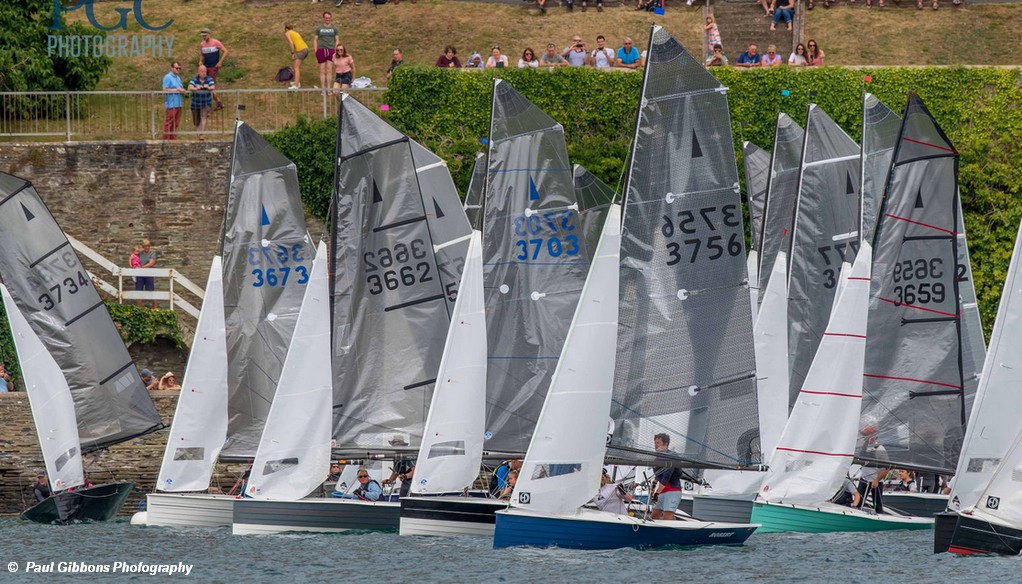 The morning race – Red v Blue flights – Sailed over the top of the tide the fleet behaved themselves and got away cleanly. Jackson and Henderson soon tacked to clear their air and found some more lifting pressure towards the Ferry Landing to cross the fleet and start to pull clear ahead.

PRO for the day Simon Dobson wisely chose to shorten the course with a run to Mill Bay rather than Blackstone to avoid the no wind zone.

Jackson and Henderson held on to take the win to go with their second place on Sunday. Ballantine and Allen did very well for a heavier team to battle through to second ahead of Simon Blake and Phil Dalby.

Dave Winder and Liv Bell were a strong fourth ahead of Tim Saxton and Holly Scott recovering from their race one BFD with a good counter in fifth.

Olly Turner and Sam Mottershead, also BFD on day one, pioneered the town side on the beat back from Blackstone to close out a top six result. 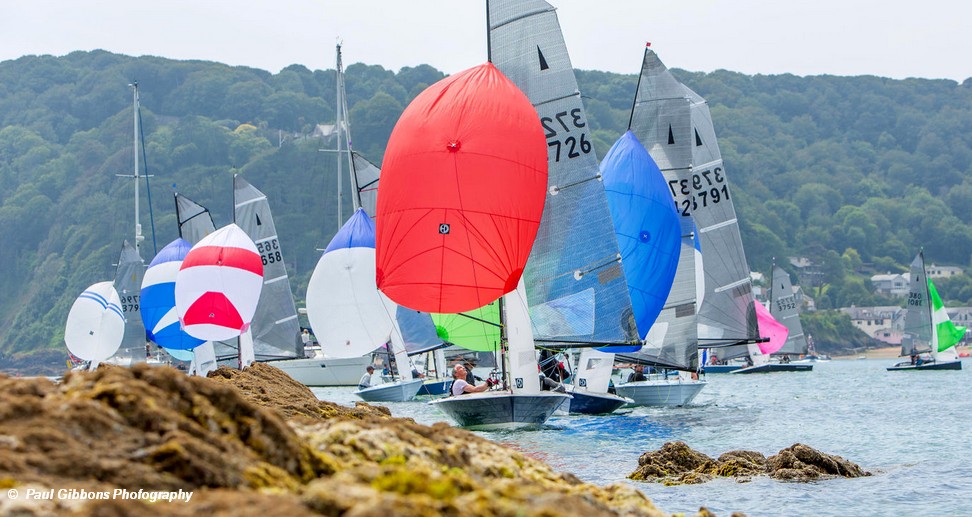 The run back to Mill Bay mark had the fleet dodging rocks and sand bars. While the leading bunch pulled away in their own race, the chasing 50 boats all ended up approaching the mark line abreast.

There proved to be insufficient room for all the boats to fit between the mark and Mill Bay beach and the spectators on the beach speculated that they could run across the foredecks out to the mark and back.

The Jury boat were in a flurry of flags and whistles to which the popular response was a resigned shrug. Four teams are being called to the room tomorrow to answer to their crimes!

Meanwhile at the head of the fleet, racing was continuing amongst the tightly bunched leaders.

Whitworth and Scroggie held their lead until, off Mill Bay, the Gilberts brought a gust up from behind to take the lead. A tight reach across the harbour to X mark off the Ferry pub terrace produced no further dramas.

the Gilberts took the win to add to their third on Sunday, Whitworth and Scroggie were second to be joint overnight leaders, the Calverts added a third to their first race second and Simon Potts and Ally Potts were fourth.

Tim Fells and Frances Gifford put their first race BFD behind them with a counter in fifth ahead of Chris Jennings and John Hackett.

The forecast for Tuesday is for a light northeaster but with wall to wall sunshine there is every prospect of a sea breeze developing.