Principal Race Officer Stuart Childerley defied the forecast and, as Villasimius came good, succeeded in holding the full schedule of five races for the GC Racing Tour. It also caused considerable re-arrangement of the leaderboard.

There were two star performers of the day. Oman Air returned to the Marina di Villasimius this afternoon having pulled out an eight point lead.

However while the Omani team, led by new skipper Adam Minoprio succeeded in scoring 10 points today, Alinghi was close behind on 11.

While Alinghi showed unparalleled consistency, they won only one race compared with Oman Air’s three. Nonetheless the Swiss team’s performance today was enough to elevate them to second overall, leapfrogging both NORAUTO and INEOS Rebels UK.

After the first two races were won by Oman Air, with the wind dropping the race team were forced to move the entire race area around to upwind starts.

After almost two hours of angst waiting, the wind miraculously filled in and remained in a just true enough direction and speed to enable more four more races to be sailed.

In the first of these races, Oman Air started on port, led out to the right and, despite a strong challenge from Erik Maris’ Zoulou, went on to win the race.

For race three it was the turn of INEOS Rebels UK to lead at the top mark however at the leeward gate she went left as Alinghi split right, causing the Swiss to finish ahead, the British team relegated to third.

Finally in race four Ben Ainslie returned to form, as the INEOS Rebels UK led around the top mark and this time clung on.

As Ainslie observed subsequently: “Today we had some ups and downs. We made small mistakes here and there but it’s good to get back into the racing and that’s why we are here for.” 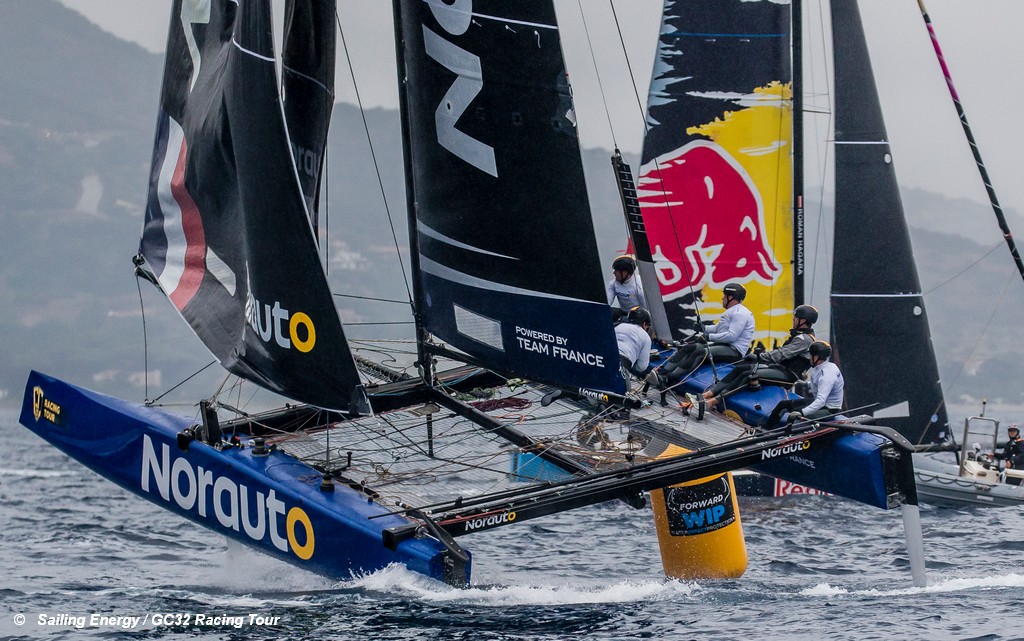 For the final race it was the turn of Red Bull Sailing Team, of Austrian two time Tornado Gold medallists Roman Hagara and Hans-Peter Steinacher, to lead around the top mark.

However they opted for left on the run (generally unflavoured today) when Oman Air went right and once again this led them to come out on top.