Racing was abandoned on the penultimate day of the Finn Europeans in Athens late on Friday, with no more races sailed due to very light wind all day.

Olympic champion Giles Scott, from Britain, will go into the medal race with a 15-point lead over world champion Zsombor Berecz, from Hungary, in second.

Third placed Andy Maloney, from New Zealand, cannot win gold but can take the silver. The medals can only go to these three.

Norway and Brazil secured their places at the Tokyo 2020 Olympic Games, while behind them, the battle for the remaining two Olympic places is intense with seven countries in the next nine places hoping to qualify, and with 35 points between them.

At the moment, the two spots are occupied by Switzerland and USA, in 11th and 12th, but the points are really close in the chasing group, so everyone will have to be at the top of their game. It is two down and two to go. 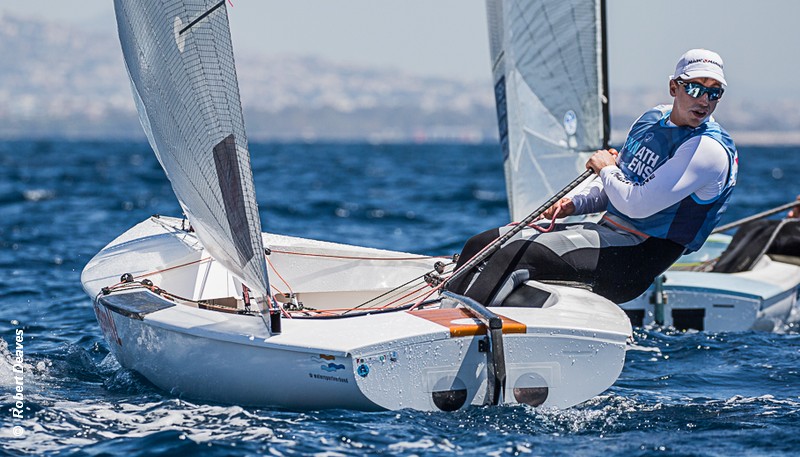 With several countries using this event in their national selection process for Tokyo 2020, Nicholas Heiner has won the Dutch selection after overcoming triple Olympian, Pieter-Jan Postma.

Sitting in fifth overall, Heiner was runner up at the Europeans last year. “Great to have Olympic selection, but would have been nice to have been higher on the podium here.”

For the U23 European title, the defending champion, Nils Theuninck, from Switzerland is 36 points ahead of Joan Cardona, of Spain. Oskari Muhinen, from Finland, is a further 26 points back.

Championship leader Scott commented, “Good position to be in but still a bit of work to do tomorrow.”

On focusing on the Finn campaign, “It’s still very much a balancing act with the various campaigns. Everything on the America’s Cup side will begin to ramp up over the next 18 months, as obviously will the Olympic side, so it will take a bit of time management, but I am sure its all doable.”

Scott is expected to be confirmed as the Team GB selection for the final Olympic sailing Test event in Enoshima this August.