Reggae in the Park Race Day at Antigua Sailing Week

Twenty knots of trades powered up the action on Reggae in the Park Race Day at Antigua Sailing Week.

In three Bareboat Classes, 26 teams from Australia, Austria, France, Germany, Great Britain, Switzerland and the USA are competing at Antigua Sailing Week. Competition at the top is intense.

In Bareboat 3, Hans Steidle’s KH+P Barbuda is leading the class, with Michael Cannon and Neil Harvey’s KHS&S Contractors from Florida in second place. However, with a discard kicking in for the next race, there is virtually nothing between the two teams.

Tuesday it was the turn of the Double-Handed Class for some bay watching.

Their courses included a downwind slide round to the west coast of Antigua and a blustery beat back to the finish. Philip Asche’s American Swan 44 Freebird won the race.

The Multihulls had a spectacular course southeast of Antigua, including a long beat east along the rugged coastline, followed by a succession of blast reaches in full offshore conditions. Robert Szustkowski’s HH66 R-SIX won the race. 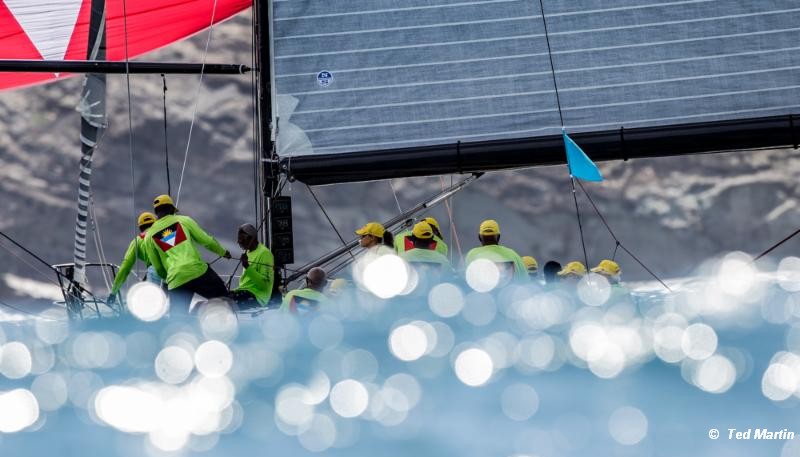 The intensity of racing in the class was exemplified by a tie for first place, after time correction, between Performance Yacht Racing’s British First 47.7 EH01 and Pamala Baldwin’s Antiguan J/122 Liquid, skippered by Jules White.

After five races, Scarlet Oyster leads the class with Liquid second, and EH01 third. However with the discard kicking in for the next race, the battle for the lead is incredibly close.

In CSA 5, Jonty and Vicki Layfield’s Antiguan J/11s Sleeper racked up two more race wins to lead the class by three points. However the devil is in the detail as Sleeper won Race 4 by just 12 seconds from Richard Matthew’s ST37 Holding Pattern.

In CSA 6, Raymond Magras and Patrick Bernier’s St.Barths’ Dufour 34 Speedy Nemo scored their first win of the regatta. However, Jules Mitchell’s Antiguan 1720 NSA Spirit won the last race to retain their three point lead at the top of the class. Maëlia CEPAC Antilles remains in third.