The Class of 2020 will be chosen from the present British Sailing Team which comprises of an elite squad of 71 sailors covering the ten sailing events used in the Olympic Games.

For Tokyo 2020 the sailing events are based at Enoshima Yacht Harbour, and scheduled to take place from 27 July to 6 August 2020, with no changes to the events or the boat classes being used.

It is Paris 2024 that is likely to see several changes, with the kiteboard and keelboat introduction, the Finn dropping out and a number of other equipment and event changes likely. For the up-coming Games it is business as usual.

So where are we now as sailing teams across the world start their selection procedures, and every race performance is scrutinised for its relevance to Tokyo 2020?

The British Sailing Team is looking stronger than it has for some time, with good depth in most events. But this adds to RYA team boss Mark Robinson’s problem – that it’s a one-shot game.

He does not get the luxury of sending two or three competitors to each of the ten events, and hoping one hits peak form on the day.

At the World Cup and Championship events each country has multiple entries capable of getting on the podium, it’s a different game. In Olympic sailing what you see is what you get, you have one chance of picking a winner.

So Robinson’s one choice has to be the best of the best, and although he has until the start of the Games to make that choice, it’s always looked like a case of picking and hoping. In previous Games loss of form and sickness after selection has affected performance.

The RYA released its Tokyo 2020 Olympics selection policy back in October but does not allow anyone to access it except those eligible to compete for Team GB.

So, we just have to guess that the major World Cup and Championship events will be the focus for selection decisions, with close run things being decided on the toss of a coin? 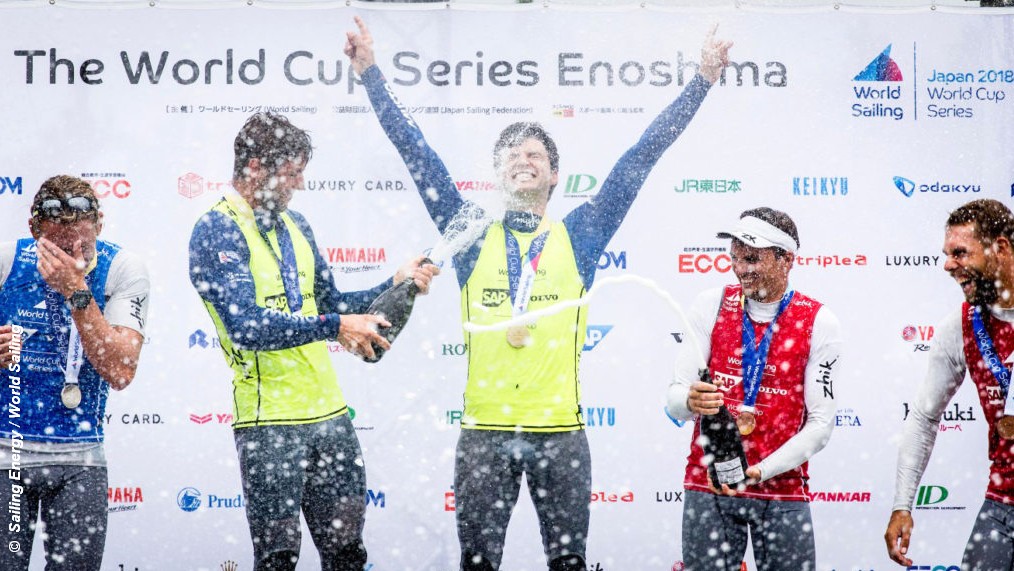 For the British Sailing Team, the 2019 season opens with the second round of the World Cup in Miami, USA, starting 27 January.

There will be a 40+ strong squad of team sailors getting an early start, with only the top Finn guys – competing in Australia – and the top Nacra17 pair Ben Saxton and Nikki Boniface missing.

Then it will be back to Europe for the traditional season opener, the Princess Sofia Trophy regatta in Palma in April, kick-starting a jam-packed programme that includes the Tokyo 2020 test event in Enoshima in August, and then a series of World Cup and World Championships, leading into the final events before the Games in July 2020.

Britain is already qualified for Tokyo 2020 in all ten sailing events, so that is not a factor in attendance at Olympic class events.

This is all about individual British Sailing Team members competing at the highest level for selection to represent Team GB in the sailing competition at the Tokyo 2020 Olympics.

Among the 71 potential representatives, eleven have competed in previous Olympics and of those five have won medals – 2 gold, 3 silvers and 1 bronze. 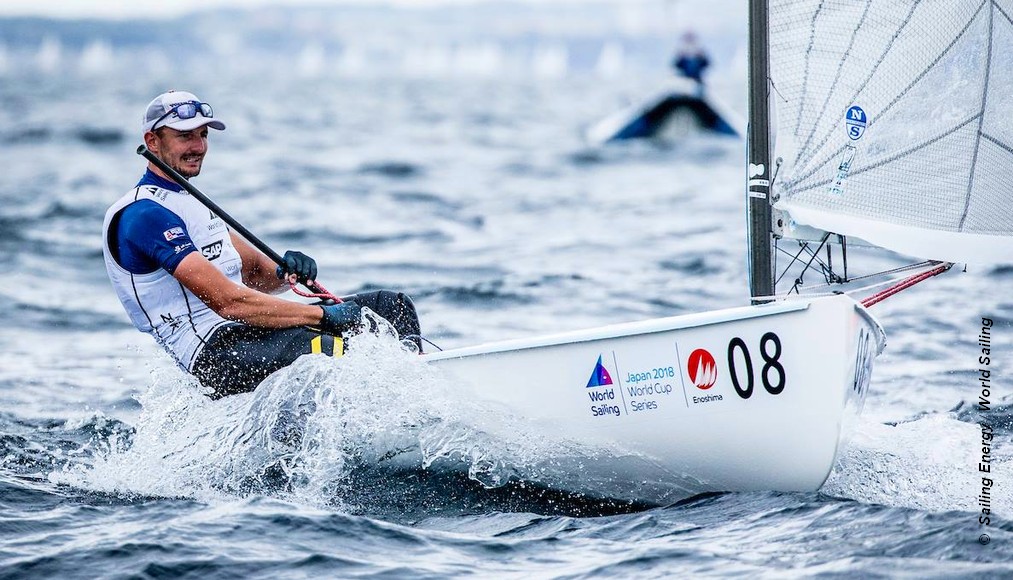 Giles Scott is the one you must beat in the Finn class to get to Tokyo and chief pressure will come from Ed Wright who scooped up the European title in 2018 and was only one point behind Scott on the podium at the 2018 Enoshima Test event.

Scott won gold in the Finn in Rio 2016 (the sixth consecutive Finn gold win for GBR) and this will be his last chance to win another gold in the class before it is replaced with an offshore keelboat in 2024.

He is also a member of Ben Ainslie’s INEOS Team UK who are Britain’s challenger for the America’s Cup (AC36). The AC36 will begin to ramp up in late 2019 so he will have to split his time between the two high-profile events.

The top Finn sailors are down under for the Aussie summer events at present but expect to see them back for the World Cup events in Europe and the Europeans in Marsala, Sicily in May.

470 helm Hannah Mills won a silver at London 2012 and gold at Rio 2016, and is looking for another gold in Tokyo with new crew Elidih McIntyre.

They look on track and after the Miami World Cup will face the Europeans in Italy in May, and the 470 Worlds which handily takes place at Enoshima in August. Amy Seabright and Anna Carpenter are the next in line if they wobble.

470 helm Luke Patience took silver at London 2012 and was fifth in Rio.

Now sailing with Chris Grube, Tokyo would be their second Games together, but they missed the cut at the 2018 Hempel worlds, and crashed & burned at the Enoshima Test event.

But you can never write off the exuberant Patience and combined with Grube’s calming influence expect to see them turn it round in 2019. Martin Wrigley and James Taylor are the guys in the wings, see them both in Miami.

The present men and women’s 470 events are changing to a single, mixed gender event in 2024, maybe still using the 470, so it’s a last chance for these crew combinations to go to the Olympic Games. 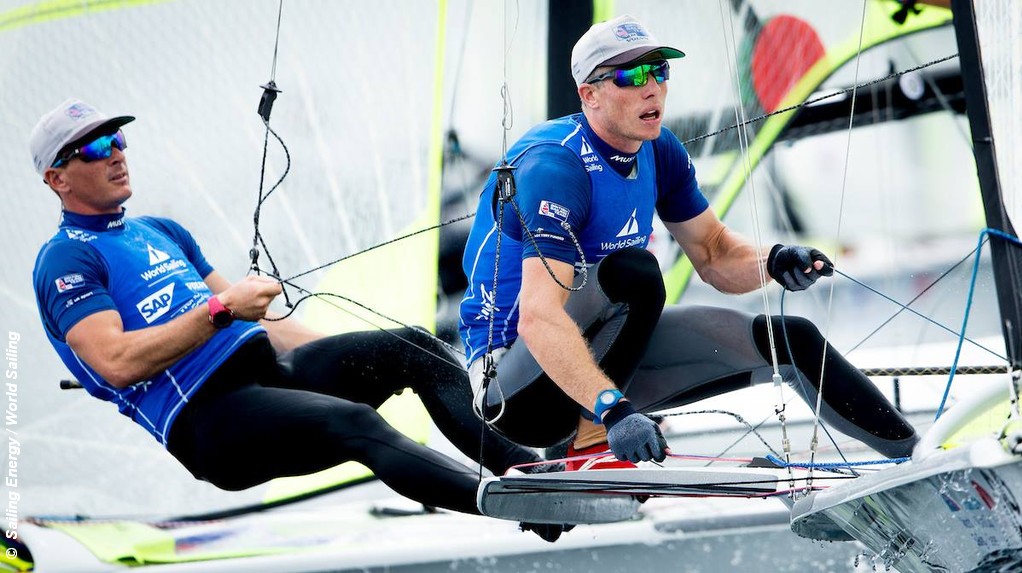 49er World Champions Dylan Fletcher and Stuart Bithell (470 silver medallist) face a full-on year, with their involvement in the new Great Britain SailGP multihull team, with an opening event in February in Sydney and four other events across the world in 2019.

In the 49er squad their main rivals are James Peters and Fynn Sterritt who just edged them at the Hempel Worlds and then took the gold at the 2018 Enoshima Test event. This one looks wide-open.

Tokyo 2020 is only the second Games for the women’s 49erFX class.

Leading British pair are Charlotte Dobson and Saskia Tidy who both competed in Rio 2016 (Dobson was 8th).

They will face strong competition from Sophie Weguelin and Sophie Ainsworth who took third at the Hempel Worlds and the 2018 Europeans and are improving fast.

This will be another selection that could go all the way. 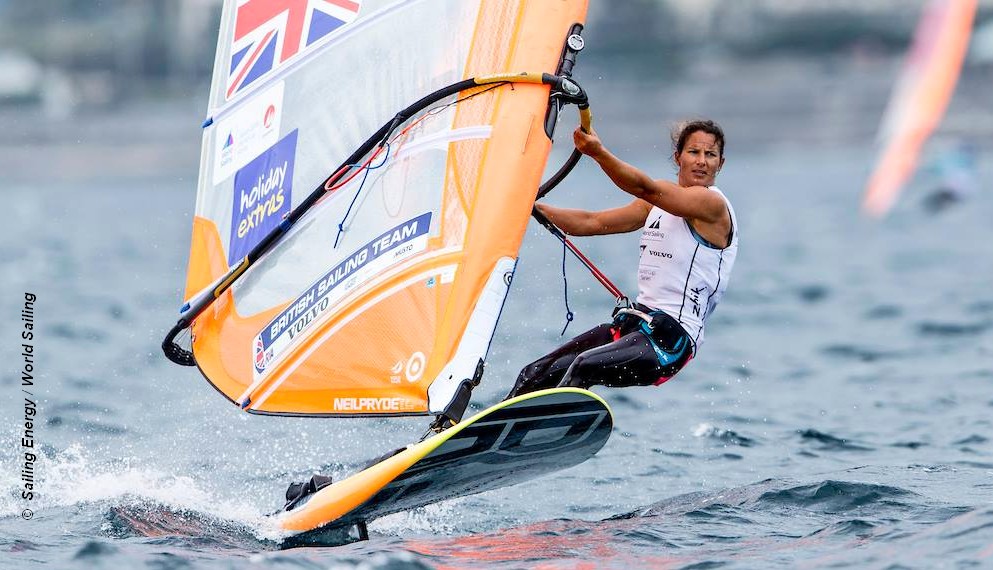 In the RS:X Bryony Shaw has competed at three Olympics winning bronze at her first in Beijing 2008.

She is returning to sailing after the birth of son Jaddek in 2017 and would love to go-for-gold one more time. This could be made difficult by the very strong RS:X squad, with the likes of Emma Wilson and Saskia Sills getting faster with every event.

The men’s RS:X face their first Games without Nick Dempsey since Sydney 2000!

Yes, Dempsey competed back then on the Mistral board, taking a Bronze at Athens 2004, then on the RS:X at Beijing 2008 (4th) and taking Silver at both London 2012 and Rio 2016. An amazing five Olympics, winning three medals.

The present squad top spot looks to be between Kieran Martin-Holmes and Tom Squires.

Squires the long-time pace setter, has come under pressure from Martin-Holmes who took fourth at the 2018 Worlds, with Squires 15th, but they were neck and neck at the Enoshima Test event, but both missing the cut.

The Nacra 17 multihull is a recent addition to the Games and has upped the ante by going to foiling mode for 2020.

Helm Ben Saxton was ninth in Rio and is now competing with new crew Nikki Boniface. Saxton and Boniface have come under pressure from John Gimson and Anna Burnet, with Chris Rashley and Laura Marimon Giovannetti also adding to the mix.

The 49er, 49erFX and Nacra 17 classes are holding their 2019 European Championships at WPNSA in early May, so that would be a great event to get a look at the British Sailing Team squad in action and some pointers to possible Olympic representatives. 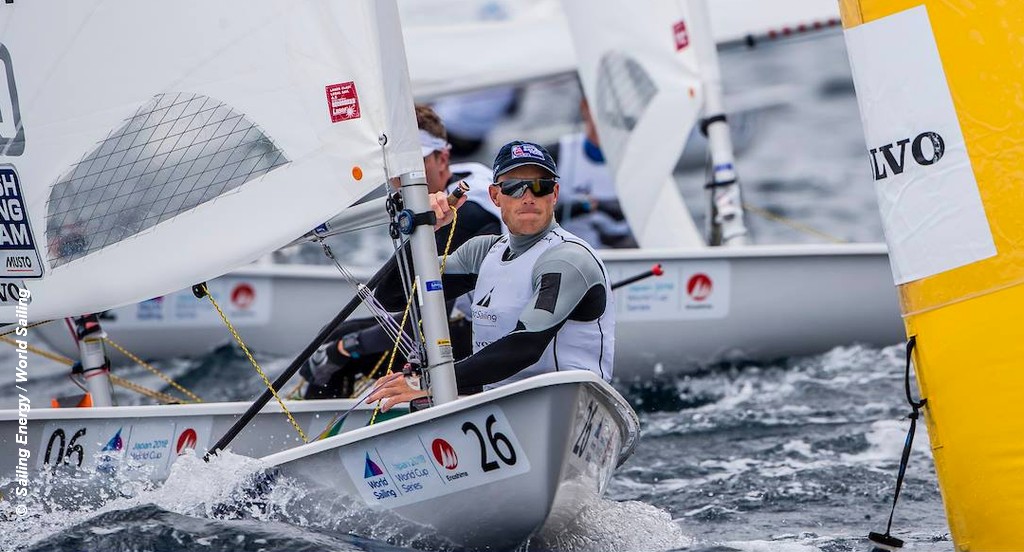 Laser sailor Nick Thompson was sixth in Rio 2016, after just missing out on selection in 2012.

But despite his double World Championship credentials, he is coming under considerable pressure from a strong GBR Laser squad.

Elliot Hanson won the Enoshima Test event and was ahead of Thompson at the Hempel Worlds and the Marseille World Cup.

Mike Beckett and Lorenzo Brando Chiavarini have also improved rapidly in 2018. Can the old dog still teach them a few new tricks?

Britain has never won an Olympic medal in the women’s Radial class.

Alison Young competed in London (5) and Rio (8) and was best Brit (7) at the Hempel Worlds, but in 2018 she was beaten by Georgina Povall at the Marseille World Cup, and Hannah Snellgove at the Enoshima Test event.

If you could guarantee force 4+ Young would be a shoo-in, but in the wider picture this could go to one of the young guns.

For aficionados of top class competitive sailing, 2019 will be an interesting year as the fortunes wax and wane. The America’s Cup and SailGP will add to the mix, and we haven’t even mentioned Brexit . . .

For more on the British Sailing Team see the RYA website