Leigh McMillan is one of the UK’s top multihull sailors. He grew up on the Isle of Wight – home to the first America’s Cup – and began sailing with his father, who skippered classic yachts.

He progressed to dinghies at the age of eight, representing Britain at the Optimist Europeans and Worlds.

A move into the Laser Radial class saw him win the Youth Nationals before transferring to the Hobie 16 when it became an ISAF class for the Youth Worlds – he competed in the Youth World Championships in South Africa and this began his career in multihulls.

Leigh went on to win three Extreme Sailing Series and in 2015 managed a sweep of both the ESS and GC32 Racing Tour in foiling multihulls, to add to his Olympic appearances in the multihull Tornado class for Team GB in 2004 and 2008.

And through this period, history was aligning the tectonic plates to the advantage of McMillan and his multihull colleagues. 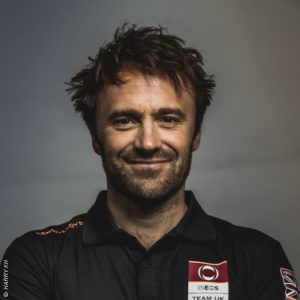 “It was watching the Alinghi and Oracle match in 2010 that the America’s Cup took on a new lease of life for me. Seeing those machines, bigger versions of what I was racing was really inspiring. That’s where all my focus went to next. I wanted to be a part of the Cup. I felt like I was in a position to make the jump and be competing with the Cup teams.”

And then suddenly, just a couple of years later, the game changed again as Emirates Team New Zealand took it onto foils when they launched their AC72 for the 2013 America’s Cup.

Then the foiling GC32 was introduced onto the Extreme Sailing Series circuit for the 2016 season . . . and suddenly McMillan was in the right place at the right time, and he started talking to the British Cup team.

The team were based in Portsmouth before relocating to Bermuda ahead of the AC35 in 2017, but were knocked out during the semi-final stage to eventual winners, Emirates team New Zealand.

“Getting up on the foils is pretty exhilarating, suddenly the boats pick up a whole new level of speed. It makes them more difficult to sail, the boat handling is more awkward. All of the load is on two foils so you have to get everything right and it’s a big workout for the crew. You have to anticipate and make decisions about what you’re able to do physically.”

“It’s a new dimension. The increased speeds, the sensation of flying above water, the noises all change, the whistling and humming. My role on-board has changed for this edition and it’s a very exciting time to be competing in the Cup right now.”

Now based in Auckland, New Zealand for the 36th America’s Cup, and with the second Ineos Team UK, AC75 boat just launched ahead of the first raciing in mid-December, McMillan will be heading into his second America’s Cup campaign.

Where do you see yourself in ten years’ time Leigh?

“On the back of winning the America’s Cup and still being involved in the sport.”