With their second AC75 boat launched the Ineos Team UK challenge for the 36th America’s Cup moves a step closer.

Skipper Ben Ainslie has described the new Britannia (RB2) . . .  ‘as the best-looking boat I have ever seen. She really looks like a rocket. Hopefully she sails like one as well. I am confident that she will’.

Beauty might be in the eye of the beholder, but the radical design is down to the Ineos Chief Designer Nick Holroyd and his team.

Holroyd has said that, ‘having a crew that has now sailed an AC75 in RB1 makes us much more dialled in with the end users, the sailors, and enables us to be more specific to their set of requirements.’

With RB2, gone is the slab-sided sled, and in its place is a curvaceous hull with the token skeg/bustle now developed into a major hull feature, running the length of the hull.

With the deep bow providing initial left, the skeg/bustle widens as it runs aft, combining with a distinct lateral bulge in the hull from the foil-arm area aft, but retaining almost its full depth back to the rudder position.

The skeg/bustle is intended to close the gap between the hull and the water surface to increase the ‘end-plate’ effect of the sails, when combined with the deck sweeper mainsail.

This enhanced ‘end-plate’ blocks the airflow going across the boat, thus increasing the efficiency of the sails to provide more drive.

The design focuses on a much narrower waterline, with the stern particularly featuring a smaller riding area, with soft chines rising (RS300 style) to meet cut-down vertical side deck, in contrast to the almost full width stern of the earlier design.

The foils at launch were a small anhedral angle from the foil-arm pod, cranked to flat outer sections, rather than the straight anhedral angle foils seen on the first hull (RB1). The starboard foil appeared to have small wing-tips.

All these improvements are expected to increase the top speeds into the mid-fifties or more. 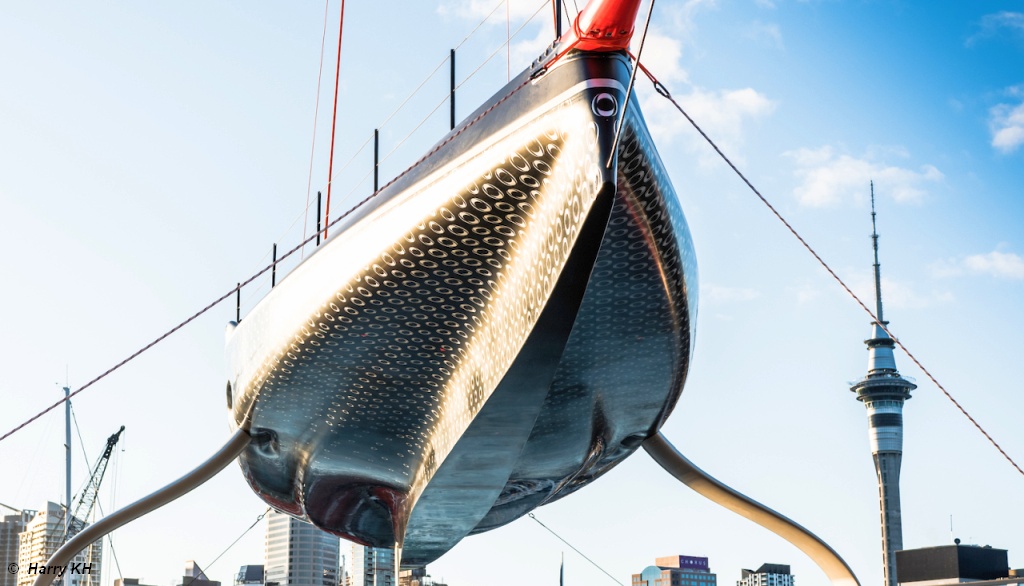 Time is now of the essence. After test towing over the weekend, Ainslie expects to begin sailing during the week.

While they will have tested the new boat on the simulator, they have only a limited time for hands-on sailing before the first AC75 races in mid-December.

This will provide the first opportunity to see the four America’s Cup teams racing together, but it also raises some tricky decisions.

All the teams have their first AC75 boats available in Auckland and it could be a tactical decision to race their older boat in the World Series December races, which do not form part of the actual 36th America’s Cup match series.

That begins with the Prada Cup challenger selection series starting on 17 January, with the Cup proper beginning on 6 March 2021.

Putting their first AC75, RB1, back into commission would require some re-work, as the Ineos team fitted electric winches to allow them to reduce crew numbers during the Covid-19 restrictions in the UK.

But it could protect RB2 from possible damage during the hurl-burly of the first fleet racing.

It could be a case of who blinks first.

Luna Rossa next to Launch new boat in Auckland