Journeys End as Patriot arrives at American Magic AC36 base

The name PATRIOT was chosen by American Magic’s Team Principals and endorsed by the Flag Officers of the New York Yacht Club.

The AC75 joins a venerable list of New York Yacht Club America’s Cup yachts that have honored the United States with their names, such as AMERICA, COLUMBIA, FREEDOM, LIBERTY, YOUNG AMERICA and STARS & STRIPES (2003).

With PATRIOT being the first “second generation” Challenger AC75 to arrive in Auckland, American Magic will now look to maximize testing time on the water prior to the December regatta.

In terms of how the build process for PATRIOT compared to Defiant, Brandon Linton noted that all custom boatbuilding requires constant problem solving.

“When comparing the build of boat #2 to boat #1, certain parts of the build were easier and others more difficult. This is a different design to Defiant and so there are limitations to being able to capitalize on doing the same things twice.”

After a journey of over 9,000 miles across four days in the cargo bay of an AN-124 transport aircraft, PATRIOT arrived at the American Magic Team Base in Auckland before dawn on Friday 4 September.

PATRIOT will succeed the team’s current AC75, Defiant, and is expected to compete in three upcoming AC36 regattas: 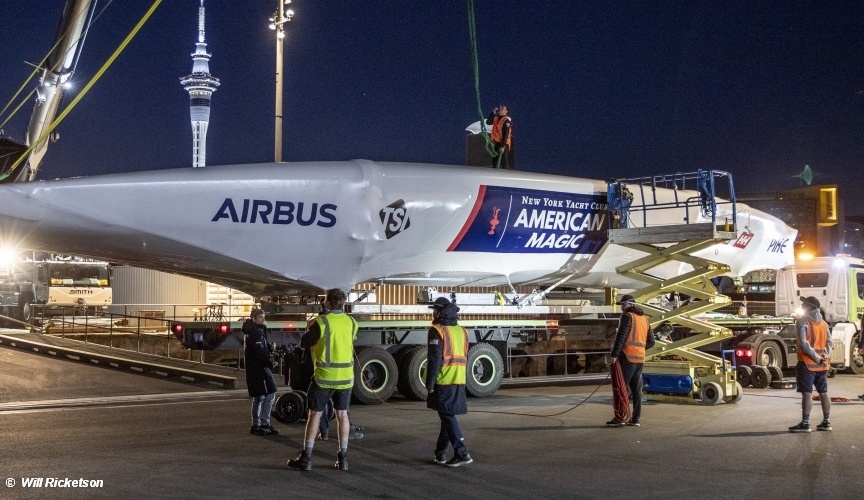 American Magic will continue to sail its first AC75, Defiant, for several weeks prior to launching PATRIOT on Auckland’s Waitematā Harbour.

It is only when PATRIOT is finally rolled out later this month that we will get to see just how ‘different’ the #2 design of Patriot is to the flat-bottomed scow design of Defiant.

The New York Yacht Club was founded in 1844 when nine New York yachtsmen met aboard John Cox Stevens’ yacht and a year later its original clubhouse was built in Hoboken, N.J.