To mark one month countdown SailGP launch their first ever global marketing campaign . . . It’s Not What You Think.

GBH Creative Director Peter Hale said: . . . ‘SailGP is something completely new, but comparable to other mass audience sports in that it doesn’t require a longstanding relationship in order to feel passionate about it.’

Well in a few weeks’ time we shall see just how passionate that audience is when season 2 kicks off in Sydney Australia and starts its progression round the world.

SailGP is trying to do what no other sailing events has managed to do – create a professional sailing world circuit from scratch.

World Sailing tried to start a world circuit the more conventional way, taking 5 or 6 internationally respected events (for the Olympic classes) and stitching them together to form a professional World Cup dinghy circuit.

This has had a chequered existence, and at present comprises just four events – and has long given up any pretence of a paid professional circuit or any sort of paying audience.

The paying audience – actual or media wise – was the key point that World Sailing forgot.

The audience did not exist and they somehow thought that thousands would flock to these events just because they were anointed with a World Sailing title.

But most sports that now deal in million dollar players and sold out stadiums, started as successful amateur events before morphing into global commercial organisations, when the players, who drew the crowds, wanted their share of the spoils . . . Something World Sailing was not prepared share or perhaps just did not have the business skills to produce.

So, outside the America’s Cup – whenever its comes around –  and the once every four year Olympic Games, any sort of audience for top dinghy sailors is pretty rare – even the gig economy of the Uber driver provides a more reliable income.

SailGP relies on the bankroll of Larry Ellison and the drive of Russell Coutts to turn the dream into reality.

At present SailGP has seven ‘National’ teams, that is 42 active sailors plus shore teams on the Ellison/Coutts payroll with one team getting a US$1m season win bonus. 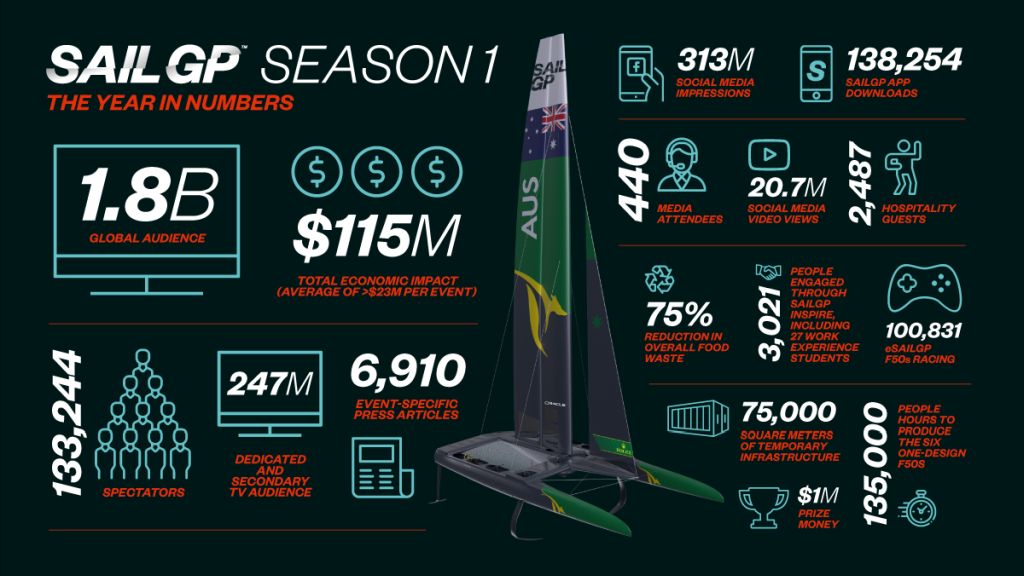 So not a very crowded field at the moment, and unless SailGP builds them a boat and there are enough sailors from other nations (preferably with their own backers) looking for an income from sailing, there can be no growth.

But according to SailGP and its hyper active PR videos, a very precise 133,244 audience – an average of 26,648 per event – turned up, although these figures seem to include anyone who was in the vicinity.

And Cowes will have had an economic impact of a handy US$23 million for its two day event!

The numbers for media platforms go through the roof – 1.8 Billion – but whether that is anyone who had the platform or those who actually bothered to track down the event and view it is not clarified.