It couldn’t have been any more exciting on the fifth and final day of the 2019 12 Metre World Championship hosted by Ida Lewis Yacht Club.

With Nyala (US-12) having clinched her series early in the Vintage Division after a sweep of Friday’s two races, it came down to Saturday’s single race to determine World Champions in Grand Prix, Modern and Traditional Divisions.

A 12 Metre Spirit Division also sailed, but with no World Championship at stake. Competing in total were 21 historic 12 Metres from six countries – the largest fleet ever gathered in North America.

In the fiercely contested eight-boat Modern Division, the stakes were high for Challenge XII (KA-10), owned and skippered by Jack LeFort. Last night the team was disqualified after a protest hearing with Courageous (US-26). Falling from first overall to second, Challenge XII was tied on point score with third-place Courageous and two points behind Enterprise (US-27), helmed by Clay Deutsch.

Going into Saturday’s race LeFort knew that to win his division, he had to beat Courageous and put a boat between his team and Enterprise. He did that and more, closing out Courageous at the start and going on to win the race with a buffer of three boats on Enterprise. (Enterprise and Courageous wound up second and third, respectively.)

Columbia (US-16), chartered by Anthony Chiurco and helmed by owner Kevin Hegarty took the World title in the Traditional Division after winning the final race. Nefertiti, owned and helmed by Jon Sears Wullschleger finished third overall, while American Eagle (US-21), sailed by the Eagle 2019 Syndicate finished second.

Even though she didn’t have to sail today, Italian Patrizio Bertelli’s Vintage Division entrant Nyala took to the racecourse to post her eighth victory in nine races. 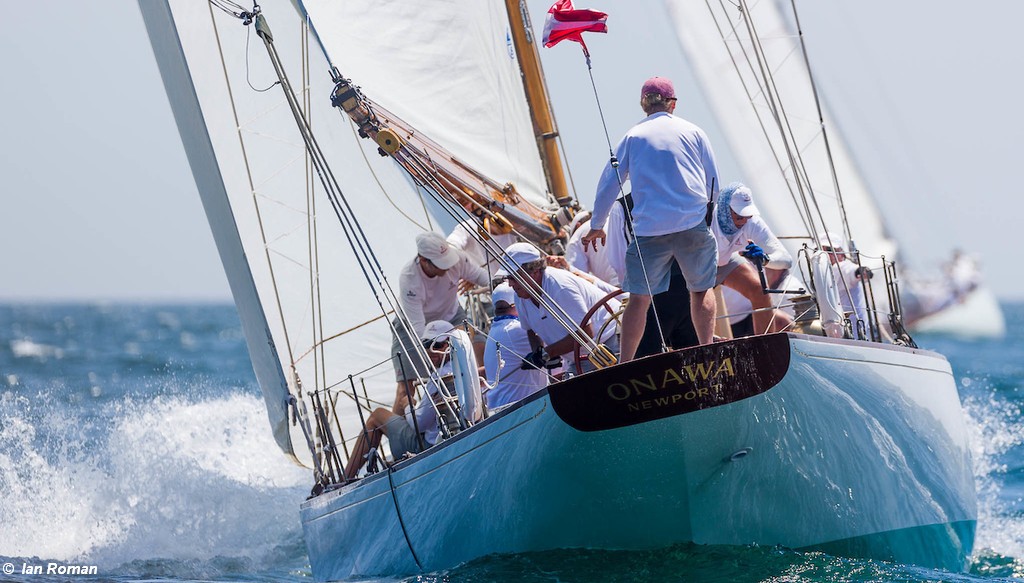 The oldest 12 Metre in the regatta was Onawa (US-6), built in 1928 and sailed by a syndicate led by Jim Blanusha, Steven Gewirz, Louis Girard, Earl McMillen and Mark Watson of Newport, R.I. She finished second in the Vintage Division.

The coveted ROAD TO THE WORLDS Waypoints Series trophy was saved for last. The series, which culminated at the Worlds, started three years ago and included 28 regattas sailed in five countries.

Based on participation and performance, Courageous accumulated 102 points to finish first, while Challenge XII took second with 99 points and Victory ’83 (K-22) followed in third with 98 points.