Whitworth and Scroggie have 4 points and lead by two points from Mike and Jane Calvert, also winners Tuesday, with Roger and Jane Gilbert in third place with 9 points.

Still in touch with the leaders are 4th Will and Arthur Henderson on 12 points, 5th Peter Ballantine and Rob Allen on 13 points and 6th Alex Jackson and Mary Henderson tied on 15 pooints with Andy Davis and Pippa Kilsby. 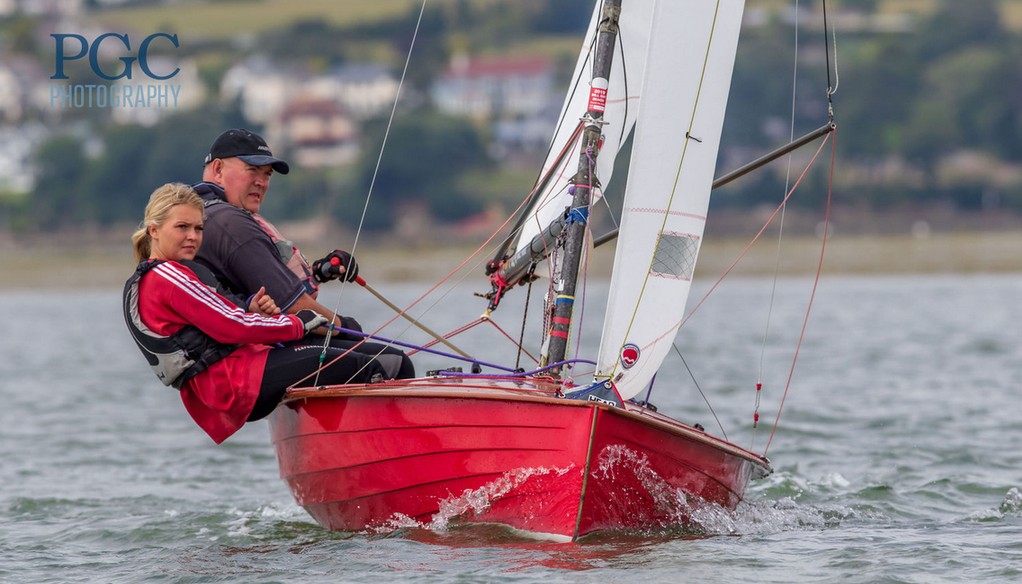 Morning race – Blue v Green flights – The sart was against a still strongly flowing flood tide and the start line close to the beach was a popular place to be. Whitworth and Scroggie are giving a master class in starting. This time they avoided the scrum on the beach and with ten seconds to go they were able to flip onto port and have a clear lane down the harbour where they soon hooked into new breeze and were away.

In the battle for second, on the beat back up to the harbour Tim Fells and Frances Gifford came through to lead from the Chrises (Gould and Kilsby) and these two extend away from the chasing group on the run down to Gerston and to the finish.

Afternoon race – Red v Black flights – The good money was to start two thirds across the harbour and get onto port early which Matt Biggs and Beka Jones executed to perfection with the exception of being two boat lengths over the line.

Mike and Jane Calvert, who love these lighter conditions, took the lead until Sophie Mackley and James Ward soaked over to the town side and then came through to take the lead into the Bag, but the Calverts took back a healthy lead into the harbour. From there on it was a routine sail with a fetch up to Blackstone and broad reach back to Crossways.

Mike and Jane took the win ahead of a delighted Sophie and Wardy. Taxi and Pippa had slowly climbed up through the fleet to take third ahead of Jen and Chris Dodds. Roger and Jane Gilbert added a useful fifth to their 1,3, with Tim Saxton and Holly Scott sixth. Rolling back the years, Pat and Jilly Blake took an excellent seventh.