The result was a disqualification for Tita and Banti from race 1.

“It was a very standard thing,” explained Bissaro. “They tried to cross on port in front of us. We were on starboard. We decided that, considering the selection for Tokyo is getting tighter and tighter and we are getting closer to the Games, it was not a good idea to give them a present.”

“We considered it would be fair enough to protest them and let the jury decide. We protested on the water and protested ashore and they were penalised.”

Bissaro and Frascari lead the Nacra 17 series with 22 points, Britain’s John Gimson and Anna Burnet are second with 38 points and Tita and Banti third with 47 points.

Flavia Tartaglini (12,4,3) is third on 42 points and just 4 points back from Sills as they go into the Medal races for the RS:X and Nacra 17 on Saturday. Bryony Shaw and Emma Wilson also start in the RS:X Medal race.

Italy’s Mattia Camboni had been at the front of the Men’s RS:X fleet all week long, however, a 12-(16)-4 scoreline saw him drop down to fourth overall. Poland’s Piotr Myszka’s (6,2,3) scoreline takes him to first overall but the points at the top of the fleet are close.

In the women’s 470, Hannah Mills and Eilidh McIntyre (1,5) retain their lead after eight races, but with their lead cut to four points by Camille Lecointre and Aloise Retornaz (2,1) of France. In third place are Noya Bar-Am and Shahar Tibi of Israel.

In the men’s 470, Mat Belcher and Will Ryan (AUS) have moved 15-points clear of Jordi Xammar and Nicolás Rodriguez (ESP). Anton Dahlberg and Fredrik Bergström (SWE) won the final race of the day and are third. 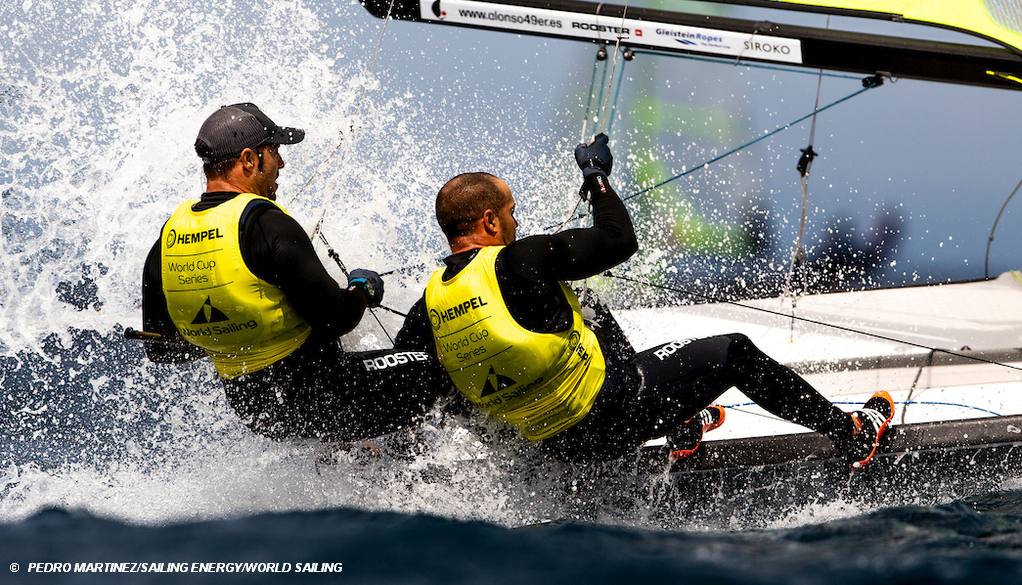 Meanwhile in the 49er, Spain’s Federico and Arturo Alonso wrapped up gold ahead of the Medal Race after another day of dominance.

Two Finn races were completed and Andy Maloney (NZL) managed to put some daylight between himself and his national rival Josh Junior. Maloney’s 4-1, compared to Juniors 2-6, has given him a six point lead with three fleet races remaining.

In the Open Kiteboarding they completed their four races, with Nicolas Parlier of France having a 68 point lead over Axel Mazella of France.

The Laser and Laser Radial fleets were scheduled for later on in the day and as the breeze picked up, they were unable to get out and race. Ryan Lo (SGP) and Viktorija Andrulyte (LTU) lead their respective fleets.