Alex Thomsom reported to have grounded on Guadeloupe Island. Thomson is safe, uninjured and in no danger. Structural checks are ongoing.

Thomson is completing his race having had to start his engine after hitting rocks and is now about 30 miles from the finish line but making only around two knots in the light winds during the hours of darkness.

First pictures of Alex Thomson’s Hugo Boss show signs of what appears to be superficial damage along his starboard hull with gouge marks from his grounding on the north end of Grande Terre clearly visible at the stern, on the foil and at the bow.

He and his team are evaluating the damage to his boat and there is no word yet about what may have happened below the waterline.

Behind Thomson on the racecourse there is still a big gap to second-placed Paul Meilhat on SMA who had 190 miles to run but was still travelling at 17 knots. He is expected to slow down once he gets closer to the islands.

Just under 20 miles behind him Yann Eliès on UCAR-Saint-Michel is holding third place. 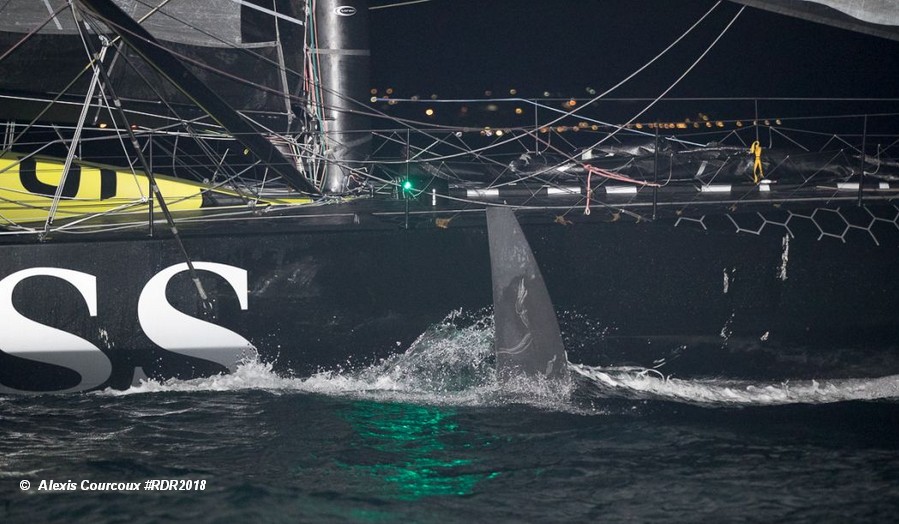 Race Direction have ascertained that while sailing on port tack at the north end of Grande Terre island, Hugo Boss ran aground on rocky cliffs around 21:45hrs (local time / 01:45hrs UTC Friday).

The accident occurred at the north end of Grande Terre, just south of the Grande Vigie lighthouse on La Pointe à Claude.

Upon hitting the cliff, Alex Thomson had to lower his sails and start his engine to reverse his boat from these rocks.

He was able to extract himself from the reefs before re-hoisting his sails to resume his passage. Thomson stopped his engine and then set a new seal on the propeller shaft.

The skipper was not injured but there is damage to his boat. The crash box in the bow is damaged and has taken in water but it is contained, and the bowsprit is damaged. The water is contained by the forward bulkhead.

The starboard foil is damaged. According to Thomson’s conversation with the Race Director, the keel and its structure are certainly also affected.

The International Jury was immediately informed by Race Direction of the accident and it will file a protest against Alex Thomson for using his engine during the race.

A safety boat has been sent and will accompany Hugo Boss in case it is needed.