According to the official figures . . . The 36th America’s Cup presented by PRADA achieved its clear broadcast and viewership objectives to be the most watched America’s Cup ever. 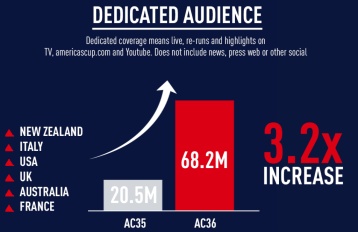 Chopped to 68.2m figure for the dedicated TV audience  when news, press web and on-line social media is removed, but still more than 3 x that of the 35th America’s Cup in Bermuda (20.5m).

This of course was not such a massive turn-around as it might seem, as sailing events are not known as major, or even minor peak viewing events.

Even here in the UK, where we actually had a team taking part, it hardly caused a media ripple, and when the hopelessly over-hyped British team turned out to have been struggling from day one, and assumed the position of plucky underdogs, it just disappeared.

TV was left with a main event that had little popular interest, even among sailing enthusiasts, and Internet numbers plummeted.

But never mind, an event that pops up every four or five years, and has a presentation format that makes Formula 1 qualifying highlights look exciting, can parade some viewing figures to rival other media ‘must watch’ sailing sport events . . . anyone for SailGP? 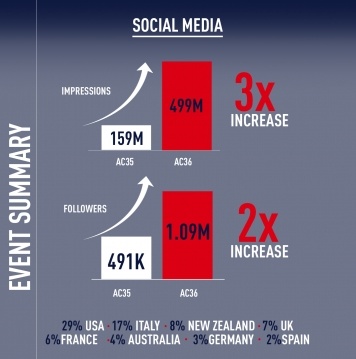 To put these official viewing figures in some sort of context, it is revealing to look at the figures for the last Football World Cup, where Fifa claimed more than 3.5 billion people viewed some of the 2018 World Cup (more than half of the global population) with 1.12 billion watching at least one minute of France beating Croatia 4-2 in the final.

Note that to reach these extreme viewing figures it is qualified as ‘at least one minute’  . . . one minute, that is just a slip of the finger when you were really trying to get the tenth repeat of Pointless!

Unfortunately the AC36 event do not break their viewing figures down to such detail.

And to get the dedicated TV audience figure of 68.2m, the ‘dedicated audience‘ includes all those who watched the event LIVE, delayed or highlights on TV, americascup.com, YouTube and Facebook.

To get any sort of audience on mainstream media is a win, as unlike other popular sports there are no regular – week in week out – events with which to build a didicated following.

These one-off events involving a few, specially formed teams, rolled out for a unique format event, that has little connection to any sail racing that 99% of club or even international sailors take part in, cannot expect to suddenly become media stars, no matter how you slice and dice the numbers.

So Yes, if these figures somehow help Ben Ainslie and the Ineos Team UK get the America’s Cup to Cowes without having to actually win the Auld Mug, then he will have achieved more than any of other British challenger has managed.

But if it involves as much backbiting and acrimony as getting the AC36 on the road in Auckland did, then perhaps Cowes might just want to take a step back . . . Look what happened last time.